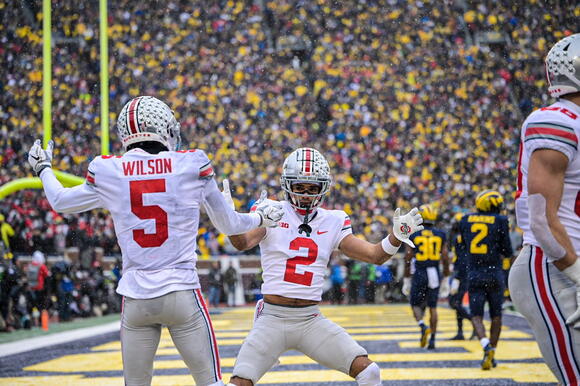 Ohio State’s success in the NFL Draft is well-noted, as the Buckeyes’ 87 first-round selections are the most of all-time among all programs.

The Buckeyes have had at least one first round selection in seven-consecutive drafts, which is the second-longest streak behind Alabama. However, Buckeye wideouts hadn’t heard their names called in the first round of the draft since 2007, and wide receivers coach Brian Hartline — who was a fourth round pick in 2009 and spent seven seasons in the NFL — was prime to break that streak in April.

Defensive coordinator Jim Knowles arrived at Ohio State in January, noting he often thought of the Buckeyes when talking about talented players with coaches in the past. Now working for a program that finished second among Power 5 programs in receiving yards per game last season, Knowles said not only did the talent around his new colleague stand out, but Hartline’s appearance did too.

“There’s a saying in our business, ‘What you see is what you coach,’ so there’s nobody better than him in terms of the product that he puts on the field,” Knowles said. “He’s a snappy dresser and he looks sharp. He just looks like you’d want a great wide receiver coach and offensive coach to look, and I’m glad to be on his team.”

For the first time in a decade-and-a-half, the Buckeyes had a wide receiver selected in the first round of the NFL Draft when the New York Jets chose Garrett Wilson with the No. 10 overall pick April 28 .

Not only did Ohio State have one first-round wide receiver drafted, but they had two — as Chris Olave went No. 11 overall to the New Orleans Saints, marking back-to-back Buckeye selections. Hartline attended the draft in Las Vegas with Olave and Wilson and said it was memorable to see two players he coached develop into first round picks.

“The emotional conversations we’ve had, and just there’s so much that comes back, but to see guys accomplish their dream in that fashion was definitely something I’ll take with me for the rest of my life,” Hartline said. “It was very cool.”

Olave and Wilson combined for 4,924 receiving yards and 58 touchdown receptions during their decorated Buckeye careers. During the 2019 and 2020 seasons, they shared the wide receiver room with former Buckeye Jameson Williams, who transferred to Alabama in May 2021.

Williams went No. 12 overall to the Detroit Lions, marking three-consecutive receivers to go in the first round and spent time in an Ohio State uniform. Across 22 games at Ohio State, Williams caught 266 yards on 15 receptions, hauling in three touchdowns.

Even though Williams sought opportunity elsewhere, Hartline said the investment spent coaching spans beyond him to others around him, like his wife, Kara Hartline, and seeing players rewarded is the ultimate payoff.

“We’re all in — my kids, her. I’m not the only coach that does that,” Hartline said. “You’re very invested, and if a guy does choose to leave, you feel that. I’m not saying it’s wrong. It’s just part of the equation now more times than it used to be, but pretty cool when you see those end results.”

Head coach Ryan Day said emotion surrounds the NFL Draft for and each player, their families, coaches and beyond. From Olave and Wilson to former quarterback Justin Fields, who also went in the first round of the NFL Draft to the Chicago Bears in 2021, Day said the success allows him to reflect on what the Buckeyes’ program can offer.

“It’s a very, very exciting time to be a quarterback and a wide receiver,” Day said. “You’re seeing a couple guys go in the first round, so it’s starting to pick up a lot of momentum. It’s very exciting in recruiting to be in that area.”

Ohio State’s list of first round draft picks may increase, as junior wide receiver Jaxon Smith-Njigba and sophomore quarterback C.J. Stroud could follow suit after boosting their value on the heels of record-breaking and Heisman Trophy finalist-caliber seasons , respectively.

Day, who’s coached alongside Hartline since both joined Ohio State in 2017, said seeing several of Hartline’s former wide receivers selected in the first round is “testimony” about Hartline and the potential for future players at Ohio State.

“A really important part of recruiting is the development,” Day said. “For the guys who are focused on that and want to develop into becoming really good college players and possibly being NFL draft picks, then Ohio State is a great option.”