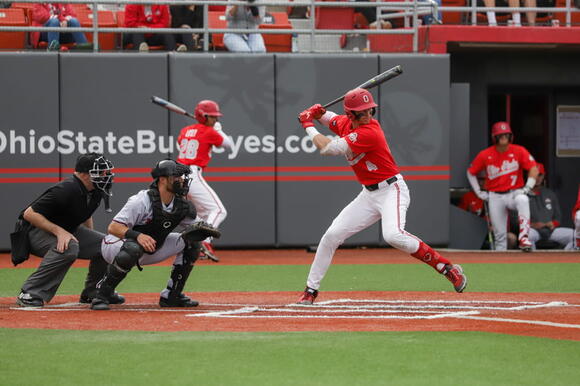 Dezenzo collected an All-Big Ten Second Team appearance at shortstop after a historical season at the plate. He hit a career-high .319 batting average, drove in 54 runs and tied the Ohio State single-season home run record with 19 across 51 games played. He also slugged .700 on the season, good for third-best in the Big Ten.

Ernst collected an All-Big Ten Third Team appearance after posting career highs in nearly every offensive statistical category. He led the team with a .337 batting average and 39 walks, the latter of which was good for third-most in the conference. Like Dezenzo, Ernst was one of only two Buckeyes to play in all 51 games this season.

Kern also saw himself listed on the All-Big Ten Third Team after receiving Freshman All-American honors by Collegiate Baseball in 2021. After a slow start to the season, Kern found his groove after finding hits in 24 of his last 27 games, including a stretch of eight-consecutive games with a hit. He finished his season with nine home runs, 15 doubles and 49 runs batted in, second only to Dezenzo on the team in those categories.

Lipsey started and played in all but one game in his first year as a Buckeye, earning All-Big Ten Freshman Team honors. The Southfield, Michigan, native batted .293 and led the team with a .461 on-base percentage and 14 stolen bases in 17 attempts. In the outfield, Lipsey was perfect on all 84 of his chances.

Redshirt-senior catcher Brent Todys was also awarded with the team’s Sportsmanship Award. Todys enjoyed a career-best season hitting .317 with 23 runs batted in and was named Big Ten Player of the Week May 11 after a scorching series against Northwestern where he went 10-for-15 with two home runs and nine runs batted in during the three-game series.