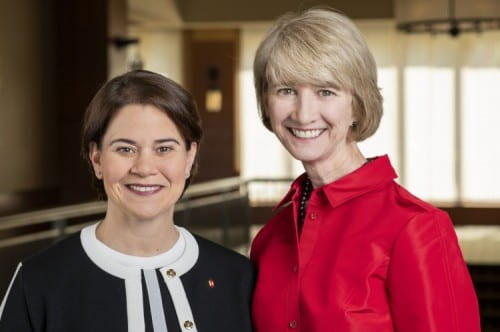 The donation is part of the university’s Scarlet and Gray Advantage program — an initiative to help students graduate debt-free by raising at least $800 million to expand undergraduate scholarships — according to a news release . The donation was announced during a Board of Trustees meeting Thursday, minutes after the board approved an increase in tuition for incoming first-year and graduate students for the fall 2022 semester.

University Trustee Brent R. Porteus said during the meeting Thursday that this donation is in line with Johnson and her wife’s philanthropic goals.

“This program will create pathways for students to earn their degrees debt-free,” Porteus said. “Together, she and Ms. Meinhard are demonstrating how the power of philanthropy, through their tireless advocacy and their generosity, creates vibrant futures for generations of Buckeyes.”

University spokesperson Chris Booker said in an email the donation is not related to any other recent news, including the tuition increase. He said this program will develop over the next 10 years, and will include a pilot program for 125 students in the fall 2022.

The first scholarship will be titled the Kristina M. Johnson Endowed Scholarship Fund, which is dedicated to undergraduate student-athletes part of the Ohio State women’s field hockey team and the women’s lacrosse team — two sports Johnson played while in college at Stanford University, according to the news release.

According to the news release, the other endowment, the Veronica Meinhard Endowed Scholarship Fund, is dedicated to annual scholarships for undergraduate students who are first-generation college students.

Booker said the scholarships will be distributed annually, and the amount given to each student is still unknown. More information can be found in the notes of Thursday’s meeting .

The donation was a part of over $550 million given to Ohio State in the last year, Senior Vice President for Advancement and President of the Ohio State University Foundation Mike Eicher said during Thursday’s meeting.

Johnson said in her State of the University Address April 21 that $84 million has already been donated to fund the Scarlet and Gray Advantage initiative thus far, surpassing its original first-year goal of $58 million.

The story has been updated at 2:36 p.m. to reflect the annual awards of these scholarships, including a link to the notes of Thursday’s meeting.