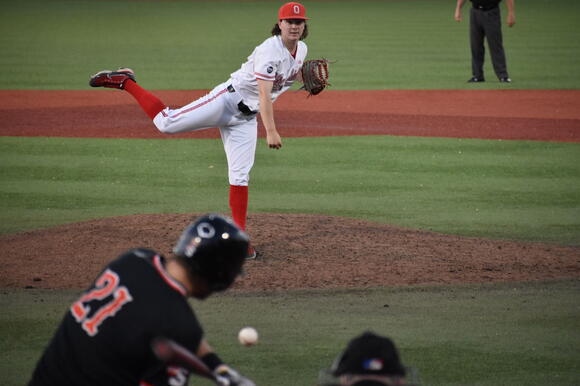 After a season with mixed results, the Ohio State baseball team looks towards the future.

With the roster shaping up to look vastly different compared to this season with the departure of many key arms out of the bullpen, the Buckeyes hope they can turn the ball over to their younger pitchers for promising results.

Tuesday’s 5-3 victory over in-state rival Cincinnati saw Ohio State play its final midweek game of the regular season. In that victory, redshirt freshman left-hander Garrett Peters pitched two scoreless frames, and head coach Greg Beals said with seven pitchers unavailable, he was pleased with how Peters stepped up to the task at hand.

“Garrett Peters has been chomping at the bit for his opportunity and he’s certainly taken advantage of it here late in the season,” Beals said. “He’s been on me and he just keeps working and putting himself in a position to be ready.”

Throughout the season, Beals called upon a number of underclassmen to provide innings where they could show results and gain experience. Of the nine qualified earned run average leaders, five are underclassmen — including a team-low 4.50 ERA from freshman right-hander Jake Johnson.

While the pitching staff shows promise, the veterans of the bullpen are paving their way forward by mentoring the younger pitchers. Graduate right-hander Aaron Funk said although he’s only been at the program for one year, he is elated to help the younger pitchers in any way he can.

“It’s one of those things where I’m really glad to have been able to help the younger class,” Funk said. “Being able to help the freshmen like Johnson, Jacob Gehring, Gavin Bruni and everyone else along the way.”

While making the jump from high school to college baseball certainly is not easy, Peters said it was with help from the veterans, like senior right-hander TJ Brock, he learned how to keep his composure at a higher level.

“My first outing at Northwestern, TJ was down in the bullpen and made sure to help me out,” Peters said. “I think I threw three or four warmup pitches in 30 seconds and he’s like, ‘Dude, slow down and take a deep breath.’ I just listened to him because he’s been in the biggest spots in Ohio State baseball, and it worked out because he’s been there before.”

With some of the younger Buckeyes recovering from sporadic injuries, Beals said that he likes what he sees with some of his young pitchers and that the future is bright.

“We have a lot of competitors,” Beals said. “Guys like Jake Johnson are at the top of that list. A lot of guys have grown from the fall to now, but we also need to protect the arms of our young players. It’s all about combining the game and competitive side with analytical stuff and finding the right blend for how to develop our athletes.”