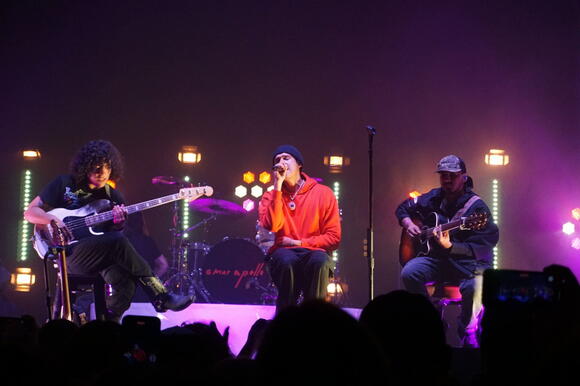 Omar Apollo’s performance at Newport Music Hall was full of special moments that recognized his cultural heritage and identity, establishing him as a humble, yet multi-talented musician.

Apollo’s Desvelado tour, which began April 5 in Portland, Oregon, brought him to Columbus Saturday, supported by opening acts Niko Rubio and Deb Never. His tour includes a variety of U.S. and international cities, and will conclude June 16 in London for a total of 29 tour dates.

Apollo said he hails from Hobart, Indiana, and is the son of Mexican immigrants, who have influenced much of his work. His breakout song “Ugotme” found success on SoundCloud, which led to the release of his 2018 EP “Stereo.” Apollo’s second EP, “Friends” was released in 2019, where his songs “Trouble” and “Kickback” in particular received critical acclaim.

His first studio album “Apolonio” was released in October 2020, and he announced his “Desvelado” tour in summer 2021, which he later postponed until spring 2022, following the release of his second studio album “Ivory,” according to his Spotify .

Rubio kicked the night off, with Columbus being her first opening performance on the “Desvelado” tour. She immediately brought an infectiously positive energy to the stage along with her bandmates. Her strong vocal performance was complimented by a spirited and spunky stage presence, which left the audience excited for the rest of the evening. Rubio also announced that her performance of her new song “Love Me Till U Hate Me” was her first for a live audience.

Never took the stage following Rubio’s set and delivered a high-energy, passionate performance alongside bandmates, who quickly became a crowd favorite. Never asked the crowd if they were “ready to have some fun” and gave the crowd a highly-involved and interactive performance. Never’s performance of “Someone Else” in particular resonated with the crowd.

It was evident that both Rubio and Never enjoyed opening for Apollo, and they exceeded all expectations for opening acts and they set the precedent for the memorable show that followed.

Apollo arrived onstage in atmospheric blue lighting and opened the show with “Talk,” an easy introduction to his new work that also allowed him to shift into performances of his earliest songs “Erase” and “Ugotme”.

One of the most enjoyable moments from the show was when Apollo dedicated a specific segment to play his songs in Spanish to connect with his Mexican heritage. He and two of his guitarists drank Modelos onstage as they performed “En El Olvido,” “Dos Uno Nueve (219)” and “Frío.” These performances illustrated Apollo’s ease with the guitar and his immense vocal talent. Members of the crowd brought a Mexican flag and waved it proudly during the performances.

Apollo had a mix of emotional and fun elements to the concert. He prefaced his song “Evergreen” by saying, “I feel good. I think it’s time to play the saddest song on my album right now,” which helped create the emotional core of the show.

“Tamagotchi” made for an extremely entertaining performance and allowed him to entertain the crowd with his dancing.

One of the strongest moments of the show was during Apollo’s performance of “Bad Life,” where he instructed the crowd to sing the chorus.

“I don’t even want to hear myself. I know that y’all just graduated,” Apollo said, referring to Ohio State’s graduation ceremony Sunday.

Apollo recognized the accomplishment many of the graduating audience members shared, which made the concert feel all the more intimate.

As the show concluded, Apollo walked offstage while the crowd chanted for an encore. He shortly arrived back onstage to deliver a performance of “Go Away.” Apollo then made another recognition of Ohio State as he began to chant “O-H,” to which the crowd responded “I-O.”

Apollo’s final performance was a second rendition of “Tamagotchi” where he and his band as well as Never and her band arrived onstage to dance and celebrate the conclusion of the concert.

The “Desvelado” tour brought three solid performances to Newport, especially from Apollo. He found a way to incorporate multiple unique elements into the concert while delivering high-quality vocals, instrumentals and dancing that made for a captivating show.