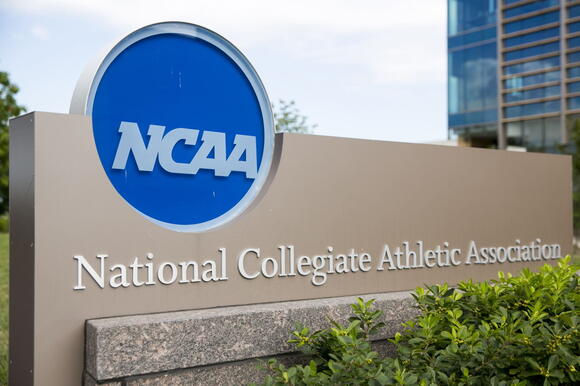 A logo sign outside of the headquarters of the National Collegiate Athletic Association (NCAA) in Indianapolis, Indiana. Credit: Courtesy of TNS

When the clock struck midnight July 1, 2021, the landscape of college athletics changed as student-athletes could legally profit from their name, image and likeness.

Student-athletes could engage in endorsement deals and host clinics, make appearances and sign autographs among the many avenues they could venture to strike a deal. However, speculation has risen regarding programs and third parties using NIL deals to sway prospective transfer student-athletes, and the NCAA issued a guidance Monday to schools, reminding them of the NIL environment and existing policy .

Wide receivers’ coach Brian Hartline said Friday he believes there is “a lot of gray” in regard to how the NIL deals should operate, and guardrails should be in place to provide clarity to how NIL deals serve their purposes.

“I think NIL was created to have Outback Steakhouse and Bose headphones and people like that to reach out and let you market with young athletes — not for collectives to go out there and, like, buy players,” Hartline said. “I think that’s what NIL was created for.”

Among the key points provided in the guidance, the NCAA will review information on individual cases but will “pursue only those actions that clearly are contrary to the published interim policy, including the most severe violations of recruiting rules or payment for athletics performance” when addressing NIL violations that occurred prior to Monday.

The NCAA said in the release “only the most serious actions” will have eligibility implications upon further review for NIL violations. The NCAA said “the emphasis of this NIL guidance is on boosters in the recruiting process,” noting “more work must be done” to regulate deals.

The NCAA defines a booster as “any third-party entity that promotes an athletic program, assists with recruiting or assists with providing benefits to recruits, enrolled student-athletes or their family members,” according to its guidance.

The Foundation represents one of the many organizations that provides an avenue for student-athletes to take advantage of their NIL, and the NCAA wants to make sure similar large-scale collectives aren’t outright offering payment for play. Head coach Ryan Day said NIL impacts Ohio State’s recruiting discussions, and programs are adjusting to its positive and negative effects while learning what is and isn’t allowed.

“There’s risk if you do nothing — you get left behind. If you go the other end, there’s risk that you can get fired for cause for crossing the line, so finding that sweet spot is where the challenge is right now,” Day said. “When there aren’t clear-cut rules or rules that aren’t being enforced, then it creates hard feelings and unrest.”

University of Georgia President Jere Morehead said in a release Monday that the new guidance “establishes a common set of expectations” for Division I institutions.

“The Division I Board of Directors took a significant first step to address some of the challenges and improper behaviors that exist in the name, image and likeness environment that may violate our long-established recruiting rules,” Morehead said.

Ohio State established several programs to offer education and information about NIL for student-athletes, including “ THE Platform ” and the NIL Edge Team . Opportunities appear to be plentiful and beneficial for Buckeye student-athletes, as athletic director Gene Smith said Ohio State is No. 1 nationally in NIL compensation and number of student-athletes with at least one NIL activity in February .

While the NCAA and college athletics continue navigating the first year of NIL support, coaches and administrators have called for more specific rules to prevent unfair use. The NCAA reminded schools to self-report potential violations, and Day said it’ll remain a challenge until more regulation comes concerning NIL.

“I think we all do much better when it’s black and white,” Day said. “It’s gray, and so I think the easy thing to do is throw up your hands and complain but we’re going to adapt and figure out a way to make it work for Ohio State.”