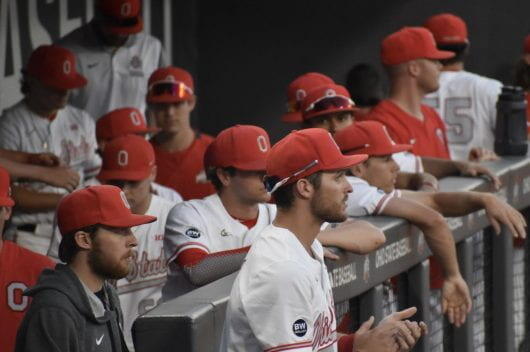 The Ohio State baseball team watches on in the dugout during Ohio States 11-1 loss to Campbell on Tuesday. Credit: Zachary Rilley | Photo Editor

“We just simply need to execute higher quality pitches,” head coach Greg Beals said. “You saw exactly what they are as an NCAA tournament team. The ball was a little up in the zone and we need to pitch at the bottom of the zone to keep them in the ballpark. But tomorrow is going to be a great opportunity for our ballclub to bounce back.”

In the first inning, Campbell jumped out to an early lead that it wouldn’t surrender. After back-to-back singles, redshirt-sophomore outfielder Lawson Harrill hit a three-run home run to give the Camels a 3-0 lead.

They added on to the lead with two solo home runs by Babin – in the second and fourth innings, respectively – to make the game 5-0.

“They play with a lot of confidence,” Beals said. “When you can hit the ball out of the ballpark and have that instant offense like they have, it feeds that confidence.”

Campbell’s offensive onslaught continued in the fifth inning, as redshirt-junior infielder Drake Pierson hit a three-run home run off of Gehring to make it an 8-0 ballgame.

Ohio State got on the board in the fifth. After senior catcher Archer Brookman walked, fellow senior infielder Marcus Ernst drove him in with an RBI double to cut the deficit to 8-1, but that was all the offense could muster.

In the seventh inning, the Camels tacked on two more on Babin’s third home run of the game and an RBI double by redshirt-junior infielder Jarrod Belbin to make the score 10-1.

Ohio State will close out its two-game series against Campbell at Bill Davis Stadium Wednesday at 3:05 p.m.