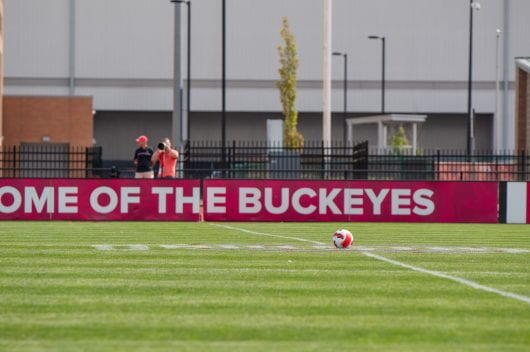 Graeff was a four-time letterwinner from 2005-08 and was named a captain for her senior season. Head coach Lori Walker-Hock said in the release that she was honored to be Graeff’s coach.

“We are all in shock by the loss of such a beautiful young mother, wife, daughter, friend, lawyer, captain and forever Buckeye,” Walker-Hock said. “We all love and miss you, Amy!”

Friends and family formed what was known as “Amy’s Army” in December 2020 to help Graeff battle her cancer through emotional and financial support. Its website includes updates on Graeff’s journey where viewers could view photos, provide financial support and leave supportive comments.

Former Ohio State back Emily Francis Kaplan and Graeff’s teammate in 2005-06 was a member of “Amy’s Army,” stating that she will always call Graeff a friend.

“Amy was the most selfless, determined and kind person I’ve ever known on or off the pitch,” Francis said in the release. “Not only was she the epitome of what it means to be a good teammate, but I was fortunate enough to see her become an incredible mother and wife and will forever call her my friend. Amy made a positive impact on everyone she met, and she will always hold a special place in the hearts of our Buckeye family.”

Cassie Dickerson — who played alongside Graeff during the 2008 season — said Graeff was influential in her leadership role, becoming an exemplary leader whom people followed.

“The most gritty, selfless, caring person who gave her all in everything she did,” Dickerson said in the release. “She was just as witty as she was kind, with the uncanny ability to hold you sternly accountable in the most supportive way possible. No one outworked Amy Graeff.”

Walker-Hock stated that Graeff was loved by her Ohio State teammates.

“Amy was the model of hard work, personal growth and the commitment to excellencein her four years as a Buckeye,” Walker-Hock said. “Amy was a fighter with the strongest character.”

A GoFundMe has been started to “keep Amy’s spirit alive” and provide financial support to Graeff’s family. Since its creation in December 2020, there have been over 800 donations, raising $120,833 of the $200,000 goal.

Graeff’s funeral will be held Friday at 11 a.m. at the Church of the Resurrection, located at 6300 E. Dublin-Granville Road in New Albany, Ohio.