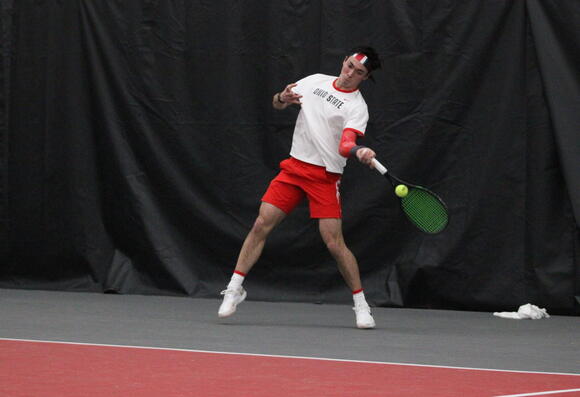 Ohio State won the doubles point, but didn’t even need a win from the No. 2-ranked doubles team in the country in the form of graduate Matej Vocel and junior Robert Cash.

Instead, the Buckeyes got simultaneous 6-3 victories on courts 2 and 3.

Boulais followed up with his second win of the day, giving the Buckeyes a 2-0 lead with his 6-2, 6-2 singles win on court 6 against Horvat.

Ohio State No. 122 graduate Jake Van Emburgh extended his singles win streak to five, as he was the second Buckeye to win in straight sets. Van Emburgh ran up to the net, fired back a few returns before gently dropping a shot in play to finish off his 6-4, 6-3 win against sophomore Henry Ruger.

No. 13 Vocel trailed 5-1 in the first set against Columbia freshman Hugo Hashimoto. He closed the gap to 5-3 before Hashimoto won the set-deciding sixth game.

No. 46 Trotter and Lions senior Austen Huang were tied 2-2 in the third set.

On court 1, No. 9 Kingsley and Columbia No. 22 Kotzen had perhaps the most eventful of the unfinished matches. Kotzen battled through an ankle injury he suffered in the first set, and the two had no shortage of trash talk for one another throughout the match.

Ohio State will face USC in the Super Regional round at noon May 14 at the Auer Tennis Complex.