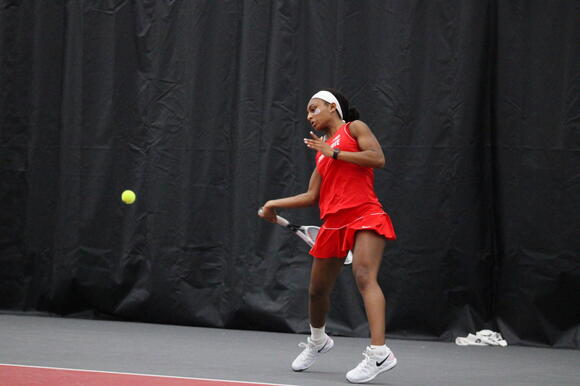 No. 10-seed Ohio State women’s tennis made quick work of Illinois State in the first round of the NCAA Tournament at the Ty Tucker Tennis Center Saturday.

The Buckeyes (21-5, 11-0 Big Ten) rebounded after their 4-0 loss to then-No. 20 Michigan in the Big Ten Tournament Final Sunday, defeating Illinois State (17-7, 4-1 Missouri Valley Conference) 4-0 — the second straight year they have swept an opponent in the first round of the NCAA Tournament.

Ohio State claimed the doubles point with wins on the first two courts.

Ohio State freshman Shelly Bereznyak entered Saturday with 12 singles match wins under her belt this season, competing in just one singles match since March 18, but she scored the most dominant victory of any Buckeye. On court 5, Bereznyak did not allow Abreu to win a game, winning in straight sets 6-0, 6-0.

Dormet followed in Bereznyak’s shoes on court 6, rebounding from her doubles loss with a 6-0, 6-0 win over Redbirds sophomore Elena Jankulovska. In the sixth game of the second set, Dormet battled back from down 15-30 with each of Jankulovska’s returns going long out of bounds, as Ohio State took a 3-0 lead.

Ratliff secured the match victory after a long back-and-forth rally before dropping a backhanded winner beyond the reach of Potsi, who was up at the net. Ratliff’s 6-1, 6-1 win was her third-consecutive win in straight sets, extending her singles match win streak to nine games.

Cantos Siemers, Boulais and Allen all led on courts 1, 2 and 4, respectively, at the time the match was clinched.

The Buckeyes are back in action against Vanderbilt — which defeated Xavier 4-0 Saturday — at noon at the Ty Tucker Tennis Center Sunday.