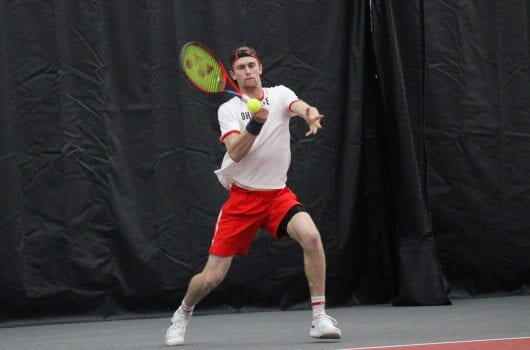 No. 4-seed Ohio State handled Youngstown State in the first round of the NCAA Men’s Tennis Tournament, defeating the Penguins 4-0 at the Ty Tucker Tennis Center Friday.

Coming off their 4-2 Big Ten Tournament loss to Michigan Sunday, the Buckeyes (25-3, 7-0 Big Ten) extended their doubles win streak to 11 straight matches as they swept the Penguins (15-9, 8-0 Horizon League) on all three courts.

On court 2, the No. 17-ranked doubles team of redshirt junior Andrew Lutschaunig and junior Justin Boulais scored the most dominant of the three doubles wins with a 6-1 victory against junior Will Everett and freshman Nathan Favier.

The No. 1 doubles pair of graduate Matej Vocel and junior Robert Cash rounded out the three-court sweep, claiming victory over Youngstown State’s duo of junior Laurentiu Mandocescu and freshman Harry Fouzas 6-2 on court 1 as Ohio State took a 1-0 lead.

In singles, No. 13 Vocel gave the Buckeyes a 2-0 lead — whose nine-match singles winning streak was snapped against Michigan senior Patrick Maloney Sunday — after winning in straight sets 6-1, 6-1 over Fouzas.

No. 9 Kingsley clinched Ohio State’s 4-0 match victory through a dominant 6-1, 6-2 victory on court 1 over Mandocescu.

The Buckeyes will square off in the second round of the NCAA Tournament against Columbia Saturday. The match starts at 4 p.m. at the Ty Tucker Tennis Center.