The Lantern20 days ago 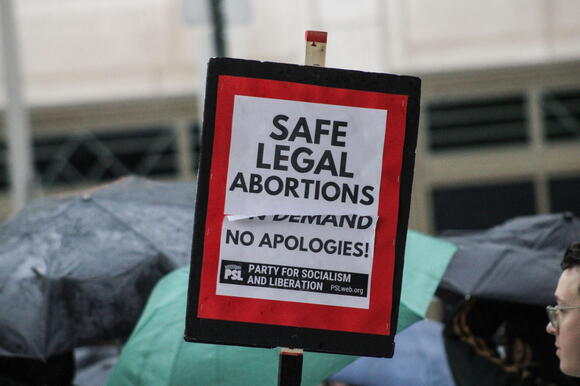 Around 100 people gathered outside the Supreme Court of Ohio Tuesday in support of legal abortion.  Credit: Casey Smith | Sports Producer

Around 100 people gathered outside the Supreme Court of Ohio Tuesday in support of legal abortion in the U.S.

Protesters, organized by Planned Parenthood Advocates of Ohio and pro-choice speakers, voiced their concern for potential changes in abortion rights and the protection of Roe v. Wade, which they said can impact the rights for Ohio women.

Lucy Reed, a first-year in music, said it’s scary to think that this debate can continue in a progressive country. She said she wanted to express her freedom of speech to show legislatures how passionate the pro-choice community is about its right to reproductive freedoms.

“We’re not going to take this lying down,” Reed said. “As a woman and someone who knows a lot of women who have been affected by abortion, it’s definitely scary, and it seems weird to think about it.”

The protest comes after Politico leaked a Supreme Court opinion draft Monday, revealing that the court may overturn Roe v. Wade — the landmark 1973 Supreme Court decision that protects a woman’s liberty to have an abortion without excessive government restriction. The Court is deliberating on the ruling of Dobbs v. Jackson Women’s Health Organization, concerning a Mississippi law that bans abortion after 15 weeks of pregnancy.

According to Oyez , in Roe v. Wade the Supreme Court ruled against a state from violating a person’s right to privacy under the Fourteenth Amendment’s Due Process Clause , which the ruling states “protects a pregnant woman’s choice whether to have an abortion.”

“It is hard to articulate though just how momentous this could be,” Ohio Right to Life said. “For nearly 50 years our country has allowed over 62 million children to be killed by abortion. Now is our time to stop this. It is our time to rebuild the culture of life. It is time for Roe to go.”

According to Ohio Law , abortion is legal until a woman reaches 20 weeks of pregnancy. Anyone who aids in the performance of an abortion after this time period can be criminally charged.

Ko Rupert, a fourth-year in political ecology, said they believe Ohio will criminalize abortion if the Supreme Court overturns Roe v. Wade, which means the state’s legal systems are failing at representing the popular opinion. A majority of Americans approve of abortion under all or certain circumstances, according to a 2021 Gallup poll .

“It’s just terrifying for a lot of reasons, and like everyone has said over and over again, illegal abortions will continue to happen, and abortions that aren’t governed by laws will continue to happen,” Rupert said. “It’s just we need to make sure that we’re really working to make it so it, when abortion is illegal in Ohio, it remains safe, and there is still access for people to go out of state and have abortions.”