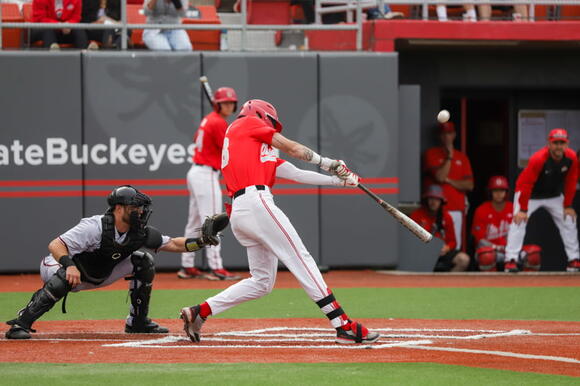 The Ohio State baseball team looked to salvage a win in its series against No. 24 Rutgers Sunday, but a bullpen implosion and sophomore outfielder Ryan Lasko with his hot series saw the Scarlet Knights come from behind to defeat the Buckeyes 11-8.

The Buckeyes (13-26, 3-13 Big Ten) saw an early five-run lead dissipate as the Scarlet Knights (36-9, 15-3 Big Ten) combined to hit six home runs and come back to sweep the series. Ohio State has dropped five of its last six games.

“It’s easy to talk about the bullpen, but we didn’t score for six innings,” head coach Greg Beals said. “We left 14 guys on base, and we weren’t able to get a hit when we needed to. We had opportunities offensively that we weren’t able to capitalize on.”

The Buckeyes scored eight runs in the first three innings, but were shut down as the game progressed. Rutgers responded to the deficit by scoring eight runs in the sixth, seventh and eighth innings, as the Scarlet Knights hit four home runs off junior right-hander Ethan Hammerberg.

The first inning was dictated by the Buckeyes. Sophomore left-hander Justin Sinibaldi lasted only 2/3 of an inning, walking three batters and giving up four earned runs. The Buckeyes scored on a pair of two-run singles by redshirt senior catcher Brent Todys and junior outfielder Mitchell Okuley, respectively, to make the game 4-0.

After a hit by pitch and a single in the second inning, redshirt junior outfielder Richie Schiekofer brought home Rutgers’ first run on a sacrifice fly.

In the third inning, Rutgers cut the lead down to one on back-to-back solo home runs by graduate infielder Danny DiGeorgio and redshirt junior catcher Nick Cimillo, as the Scarlet Knights still trailed 4-3.

But in the bottom half of the third inning, Ohio State responded with home runs of its own. Senior designated hitter Drew Reckart blasted a two-run home run over the left field wall, and Okuley followed that up with a solo home run to make the game 8-3 after three frames.

“Loncar gave us a really good start,” Beals said. “We had to go to the bullpen, and we felt good about where we were in the bullpen.”

After scoreless fourth and fifth innings, Rutgers took advantage of Loncar’s day being over with a five-run sixth inning. After a run scored on a wild pick-off attempt, redshirt freshman right-hander Tim Baird gave up a walk and a single before turning the ball over to Hammerberg.

With Lasko at the plate — who hit three home runs Saturday — the Scarlet Knights outfielder made sure not to miss as he took Hammerberg’s second pitch deep for a three-run home run to cut the Buckeye lead to one. Redshirt sophomore outfielder Evan Sleight tied the game on an RBI groundout.

“They have a lot of power potential,” Beals said. “On a day like today, with that team, no lead is safe. We were up in the zone a bit and they made us pay.”

In the seventh inning, facing Hammerberg again, Lasko continued to torment Ohio State pitching with his second home run of the game — his fifth in two contests — to give Rutgers its first lead 9-8.

In the eighth inning, Cimillo and redshirt junior infielder Chris Brito hit back-to-back home runs off Hammerberg to extend the lead to 11-8.

In a game where Rutgers used eight different pitchers, the Scarlet Knights went to their closer redshirt junior lefty Dale Stanavich to shut things down in the ninth inning. Stanavich came in and did his job, as Rutgers won the game 11-8 and swept the series.