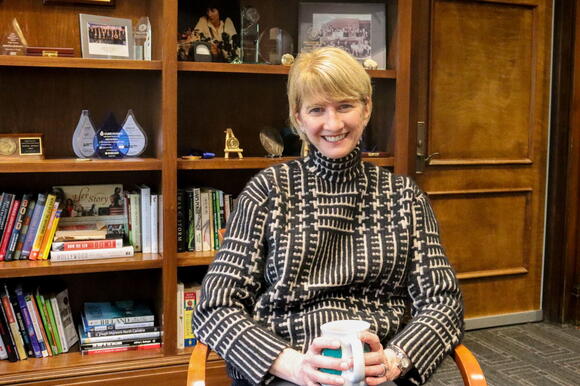 The College Football Playoff Board of Managers named University President Kristina M. Johnson as the Big Ten Conference representative Monday, according to a release .

The CFP Board of Managers comprises presidents and chancellors from each of the 10 Football Bowl Subdivision conferences in addition to Notre Dame. Johnson will replace Penn State President Eric Barron, who will retire from the university Sunday .

Johnson stated in the release that she has “long recognized” and “championed access” to competition and resources offered by collegiate athletics.

“I am proud to have played a key role in preserving the 2020 Big Ten Conference fall season at the outset of the COVID-19 pandemic and am looking forward to continuing my advocacy and working with other presidents and chancellors on the College Football Playoff Board of Managers,” Johnson stated.

Executive Director of the CFP Bill Hancock stated in the release that he’s “delighted” Johnson will join the board and noted her previous experience as a student-athlete on the Stanford field hockey team will prove valuable.

“President Johnson’s experience as a leader in higher education and as a former student-athlete will provide greater perspective for the board,” Hancock stated.

The board “develops, reviews and approves annual budgets, policies, and operating guidelines,” according to the CFP’s website .

Johnson is the second Ohio State representative to be directly involved in the CFP after athletic director Gene Smith served on the selection committee for two years before stepping down in 2019 .

Big Ten commissioner Kevin Warren stated in the release that he’s grateful Johnson will represent the conference while the CFP continues to advance.

Athletic Director Gene Smith speaks to the media during an availability. Credit: Jacob Benge | Sports Editor. Pack a suitcase and read up on the West — the Universities of California, Los Angeles and Southern California are joining the Big Ten Conference.