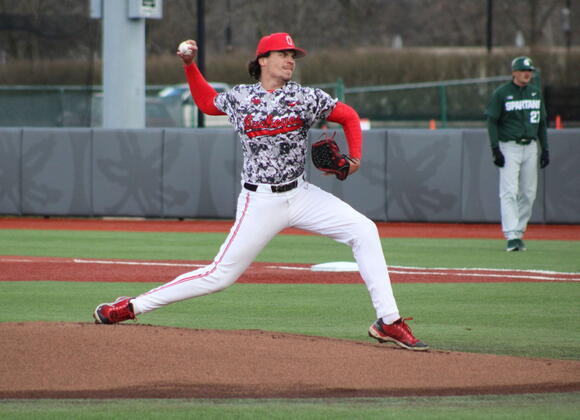 Coming off a weekend series against rival Michigan, the Ohio State baseball team expected even tougher competition against conference leaders No. 24 Rutgers. In a game dictated by the long ball, the Scarlet Knights took Friday’s game 6-4 over the Buckeyes.

The Buckeyes (13-24, 3-11 Big Ten) were stifled by a quality start from graduate right-hander Jared Kollar as the Scarlet Knights (34-9, 13-3 Big Ten) used three home runs to put themselves in an early lead they would never surrender. Rutgers has won eight out of its last 10 conference matchups.

“They’re a good ball club, no doubt about it,” head coach Greg Beals said. “But I also think they’re beatable. But what good ball clubs do is take advantage of things. I think Nate Haberthier pitched extremely well. He made a couple of mistakes and they made him pay for it.”

Each team accumulated 12 hits each, but it was Rutgers coming out on top after a series of late miscues by Ohio State which saw the Scarlet Knights extend their lead after holding off multiple late Ohio State rallies.

Rutgers attacked Haberthier early and often. In the first inning, redshirt junior designated hitter Nick Cimillo got the scoring started with a sacrifice fly. The next batter, redshirt sophomore outfielder Evan Sleight, hit a two-run home run to put the Scarlet Knights up 3-0.

In the bottom half of the same inning, after hits by senior infielder Marcus Ernst and freshman outfielder Trey Lipsey put two runners on, redshirt sophomore designated hitter Blayne Robinson hit an RBI single off of Kollar to make the score 3-1 after the first frame.

In the third inning, senior infielder Zach Dezenzo hit a leadoff double to put a runner in scoring position. Sophomore outfielder Kade Kern drove him home on an RBI single to make the game 3-2 after three innings.

“We’ve been swinging the bat pretty well lately,” Dezenzo said. “We had 12 hits tonight and put up a good fight. Just didn’t get a few timely hits.”

Both teams were held scoreless through the middle innings. But in the seventh, Rutgers capitalized with back-to-back solo home runs by redshirt junior infielder Chris Brito and Sleight — his second home run of the game — to make the game 5-2.

But the Buckeyes would not go away quietly. In the bottom half of the seventh inning, redshirt senior catcher Brent Todys hit a solo home run over the left field wall off redshirt sophomore right-hander Ben Gorski to make the game 5-3.

In the eighth inning, with junior right-hander Nate Karaffa on the mound, redshirt junior catcher Andy Axelson hit a leadoff double. He came around to score on a wild pitch and a passed ball to extend the Rutgers lead to 6-3.

Ohio State attempted its second rally in as many innings after junior outfielder Mitchell Okuley hit a solo home run to cut the lead to two. Todys singled to keep the inning alive, but nothing came of it as the Scarlet Knights led 6-4 after eight innings.

“We’re really close,” Beals said. “But there’s no moral victory for that. Part of me hates the fact that we’re talking about how close we are because we should be winning. We have got to win some of those moments. We had a couple of opportunities to win some moments and we didn’t.”

After Rutgers threatened in the ninth inning but didn’t score, the Buckeyes had one last opportunity in the ninth. Lipsey walked to bring the tying run to the plate, but the Buckeyes could not cash in as they lost by a score of 6-4.