Concert review: Aly & AJ captured summer on ‘A Touch of the Beat Tour’ 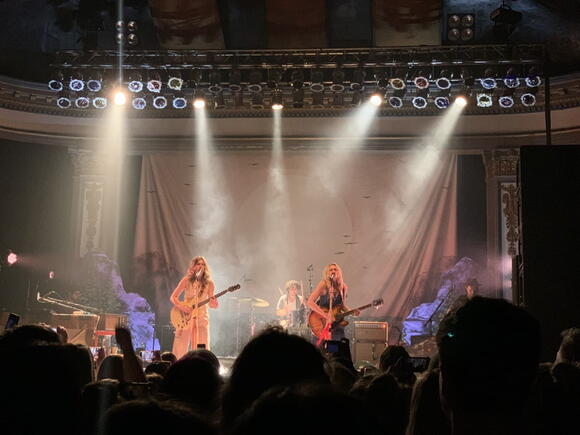 Singing-songwriting duo Aly & AJ performed at Newport Music Hall Tuesday as a part of their “A Touch of the Beat Tour.” Credit: Lucy Lawler | Lantern Reporter

Perfectly paradoxical, those who took a break from final exam preparation to see Aly & AJ in concert Tuesday were rewarded with an experience as soothing as aromatherapy and as energizing as caffeine.

Aly & AJ, or Alyson and Amanda Michalka, are often recognized for starring in the 2006 Disney Channel original movie “Cow Belles.” However, making music has always been a passion of the duo, who have released several albums since 2005 including “Into the Rush,” “Acoustic Hearts of Winter” and “Insomniatic.”

After putting out EPs and compilations for several years, Aly & AJ released another full-length studio album in May 2021. “A Touch of the Beat Gets You Up on Your Feet Gets You Out and Then Into the Sun” blends elements of pop, rock and disco. The “A Touch of the Beat Tour” began in April 2022 and will conclude in May after traveling to 35 cities in the U.S. and Canada.

Supported by The Brummies, Aly & AJ brought a fiercely lush set list to Newport Music Hall. Effortless vocal synchronization — no doubt a byproduct of the duo’s close relationship — created a summery explosion of sound. The backdrop, depicting a rising sun over open waters, contributed to the aesthetic. Colorful red and orange crepe streamers were attached to the mic stands, providing a touch of nostalgia.

The Brummies, an indie rock band from Alabama, was a sprightly opening act. Members John Davidson and Jacob Bryant — both vocalists and multi-instrumentalists — and drummer Trevor Davis were lovely onstage, not unlike the lavender-colored jumpsuits they donned.

The trio impressed with “Fever Dream,” which was jam-packed with cymbal crashes to accentuate the song’s funky and somewhat fuzzy tone. “Do It Tomorrow” was also memorable, poking fun at the age-old practice of procrastination.

Aly & AJ were truly dreamlike when they took the stage, conveying ultra-specific emotions with unprecedented ease. Describing the pain of realizing a relationship is decaying, “Lost Cause” dripped with frustration and sorrow. The lyrics painted a vivid image of suffering: reaching out to a person with open arms, only to have them recoil.

The fan favorite “Chemicals React” detailed the fiery power of connecting with someone instantaneously. Lighthearted above all else, Aly & AJ were highly engaging performers.

“Columbus, we have a question for you,” the duo said before playing “Take Me,” a song from “Ten Years.” “When are you gonna take us out?”

Often, the serene vocals of Aly & AJ were beautifully juxtaposed with weighty lyrics and melodies. Captivatingly sung by AJ, “Dead on the Beach” summarized a brush with death. The stage was enveloped in rosy light, but the space felt temporarily chilly and vast. “Slow Dancing” utilized acoustic guitar to the max, emphasizing the all-consuming nature of longing. The composition was utterly sirenic.

Strikingly, Aly & AJ directly incorporated activism into their concert. After finishing the song “Paradise,” they urged attendees to support The Trevor Project and To Write Love on Her Arms . These charitable organizations focus on suicide prevention, and the former specifically focuses on helping LGBTQ+ youth. If an audience member signed a petition or donated money, they were entered into a raffle to meet Aly & AJ after the show.

“These are wonderful organizations that have saved a lot of lives,” Aly said.

To conclude the evening, Aly & AJ performed “Potential Breakup Song,” which comes from the album “Insomniatic” and went viral on TikTok in 2020. It was an ideal ending, exuding the rebellious spunk of early 2000s pop.

Aly & AJ’s “A Touch of the Beat Tour” served up a slice of summer, and not a moment too soon. With the academic year ending, they catered to everyone craving an excuse to get up on their feet and out into the sun.