Baseball: Michigan takes two out of three against Ohio State 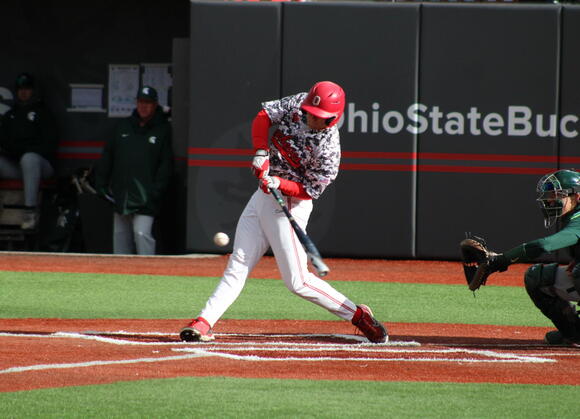 The Ohio State baseball team went into enemy territory for rivalry weekend against the Wolverines looking for its first series win in Ann Arbor, Michigan, since 1999, but a walk-off and an offensive explosion saw the Wolverines take two out of three against the Buckeyes.

Ohio State (13-23, 3-10 Big Ten) matched Michigan (22-16, 8-4 Big Ten) offensively for most of the series, but the Wolverines capitalized on a series of late Buckeye mistakes to take crucial conference wins against their arch rival.

Ohio State got off to a fast start and hoped to take the first game from their rivals, but a game-tying two-run home run in the ninth inning by junior catcher Jimmy Obertop and a walk-off single by junior infielder Clark Elliott ensured the Michigan crowd went home happy by a score of 9-8.

Ohio State got off to a quick start with a five-run second inning, highlighted by an opposite field home run by sophomore outfielder Kade Kern. The Buckeyes added on a trio of singles and a botched pickoff attempt to make the game 5-0.

However, Michigan responded right back in the bottom half of the same inning. This time, it was highlighted by solo home runs from Obertop and senior infielder Jack Van Remortel to make the game 5-2.

Sophomore right-hander Nate Haberthier was solid in his start. He went 5 2/3 innings, struck out four and allowed only two earned runs.

Solo home runs by senior infielders Zach Dezenzo and Marcus Ernst extended the Ohio State lead to 7-3 in the seventh inning, but Michigan cut the lead on a double, walk and two-run double from Van Remortel to make it 7-5.

Ernst added onto the lead with an RBI single in the eighth frame to make the game 8-5, putting Ohio State in prime position to take the first game of the series.

But in the bottom of the eighth, Michigan batters were hit by pitches three times, which pushed another run across the board. In the ninth inning, a walk and a two-run shot off of junior right-hander Ethan Hammerberg tied the game at eight.

In the 10th frame, Elliott delivered with the bases loaded and no one out, as Michigan took game one 9-8.

Powered by the bat of graduate outfielder Joe Stewart — who totaled three home runs and 11 RBIs in the game — and the team’s 12 walks, Michigan won game two and took the series by a final score of 16-13.

The Buckeyes again opened the scoring on a two-run double by Dezenzo , but the Wolverines struck back on an RBI groundout and single to make the game 2-2 in the second inning.

A two-out grand slam by Stewart gave Michigan a lead it would never look back from, as the Wolverines chased Ohio State sophomore left-handed starter Isaiah Coupet out of the game in the third inning. After Coupet was taken out, Stewart struck again on another grand slam, helping Michigan to a 12-2 lead after three innings.

In the fifth inning, Stewart added to his big day on a two-run blast off of freshman right-hander Jacob Gerhrig to make the game 14-2.

Ohio State attempted to battle back beginning in the seventh inning on a two-run double by Kern to cut the deficit to 14-4. Michigan added two more in the seventh on a pair of RBI singles to stretch the lead to 16-4.

But the Buckeyes were not out of it yet. Dezenzo and sophomore designated hitter Blayne Robinson drove in five runs on back-to-back home runs in the eighth inning to make the game 16-9.

In the ninth, senior catcher Archer Brookman launched a two-run home run over the right field wall to cut the Michigan lead to five. After a misplay in center field that scored two more, the comeback fell short as Ohio State lost 16-13 in game two.

In the final game of the series, Ohio State emerged with a come-from-behind 6-5 6-5 win courtesy of solo home runs by outfielders freshman Trey Lipsey and junior Mitchell Okuley.

Junior right-hander Wyatt Loncar started the game for Ohio State and put forth a solid outing. The right-hander went five innings, gave up two earned runs, walked one and struck out seven on the day.

The Buckeyes struck first in the fourth inning when redshirt senior catcher Brent Todys singled home senior infielder Colton Bauer to give the Buckeyes a 1-0 advantage.

But in the bottom of the sixth inning, Michigan took advantage after junior outfielder Joey Velazquez tattooed a ball down the right field line for a two-run double to give the Wolverines a 2-1 lead.

Michigan added onto its lead on a wild pitch in the seventh inning to make it a 3-1 game.

Like the first two games of the series, the Buckeyes found themselves down but not out. After Ernst reached base again, Dezenzo ripped a two-run home run over the left field wall to give himself his third home run in as many games and tie the game at 3-3.

In the bottom half of the eighth inning, Velasquez struck again off of freshman right-hander Jake Johnson to put the Wolverines back on top 4-3. An RBI single by junior infielder Tito Flores in the eighth added an insurance run for Michigan as the Wolverines were three outs away from a series sweep.

Junior left-hander Jacob Denner came on the mound for Michigan and immediately gave up a solo home run to Okuley, which cut the deficit to one. Two batters later, Lipsey tied the game at five on a solo shot of his own. Ohio State took the lead on an RBI single by Bauer to put the Buckeyes ahead 6-5 going into the bottom of the ninth.

With senior right-hander TJ Brock on the mound and runners on second and third base, Okuley added to his heroics by recording the final out on a diving catch in right field to salvage the series for Ohio State.

The Buckeyes will host Rutgers for a three-game series starting Friday at 6:05 p.m.