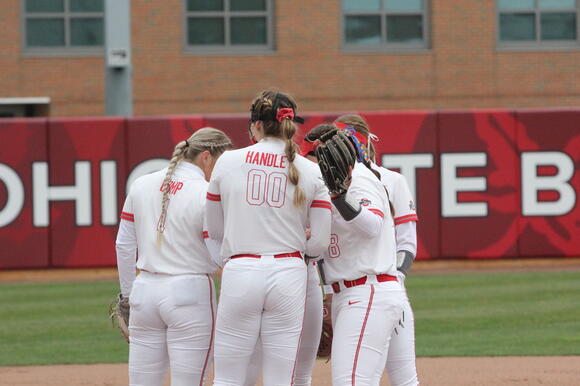 Michigan came out on top against the Ohio State softball team following a showcase of impressive pitching and grit over the course of the weekend.

Freshman outfielder Melina Wilkison had herself a weekend, starting with her first at-bat Friday. She took the fourth pitch she saw over the left-center field wall, giving the Buckeyes (28-12, 8-7 Big Ten) an early lead.

Michigan (29-14, 9-7 Big Ten) took the lead in the bottom of the fourth inning, when fifth-year infielder Taylor Bump hit a solo home run to start the frame. Junior utility Audrey LeClair scored after reaching on a single and advancing as a result of a stolen base and another single, then crossed home plate because of an error.

Junior outfielder Tegan Cortelletti hit an RBI single the next inning to add another insurance run and help the Buckeyes win 6-2.

Handley was dominant in Friday’s game, throwing all seven innings while only giving up six hits and two runs, striking out 13. The southpaw reached a career milestone of 500 strikeouts and earned her 16th win of the season.

After a tight game, the Wolverines prevailed in the bottom of the seventh inning in walk-off fashion.

The Buckeyes got on the board first in the second inning. Senior outfielder Meggie Otte hit a single up the middle to score Carver. After that, both teams’ offenses were quiet until Michigan’s woke up in the fifth frame.

Senior outfielder Lexie Blair singled through the right side to drive in a run and tie the ballgame. Graduate utility Melina Livingston hit a sacrifice fly to plate the go-ahead run, making it 2-1 Michigan.

A double off the bat of junior catcher Sam Hackenbracht scored two runs as the Buckeyes regained their lead in the top of the seventh inning. However, in the bottom half of the frame, the Wolverines could not be contained as Taylor Bump tripled to score the runs, giving them the 4-3 win.

Handley pitched 6 1/3 innings, giving up seven hits and three runs before sophomore right-hander Allison Smith came in for relief, giving up two hits and one run.

Ohio State scored all four of its runs in the first inning Sunday, but allowed five on the opposite side of the ball to give Michigan the series win.

With bases loaded, Kortokrax singled, scoring two runs as a result of an error. Otte reached on an error, which gave the Buckeyes two more runs and an early 4-0 lead.

Michigan responded immediately, when senior utility Hannah Carson hit a sacrifice fly to put the Wolverines two steps closer to narrowing the Buckeyes’ lead, as two runs were scored as a result of an error.

After a leadoff triple by graduate outfielder Kristina Burkhardt, she scored after Blair grounded out in the bottom of the third inning.

Smith came in for relief of fellow sophomore righty Emily Ruck in the fourth frame with two runners on. She gave up a double to Blair, which scored both runs, giving Michigan the lead which it would not relinquish.

Handley was perfect in the bottom of the sixth besides giving up one walk.

Storako was stellar when she came in for relief in the second inning. She pitched the remaining six innings while only giving up three hits, preventing the Buckeyes from making a comeback.

Ohio State is back in action in Columbus Tuesday, playing a doubleheader against Penn State starting at 2 p.m.