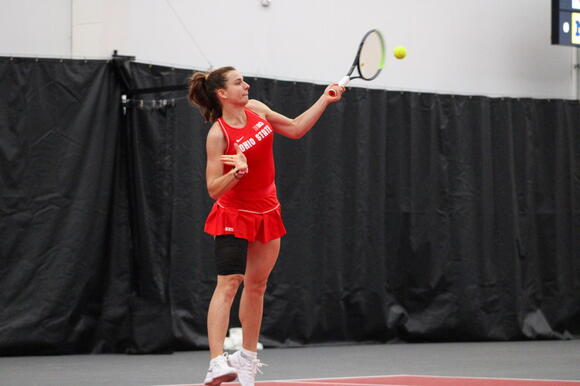 “We addressed some things after Friday’s match and I’m just happy for the girls,” Schaub said. “I’m happy for these guys to get to celebrate a little bit and enjoy themselves.”

Among those celebrating is graduate Luna Dormet, who was honored for senior day. Dormet’s time at Ohio State saw her claim 60 singles wins and only 16 losses across three years donning the scarlet and gray.

“It was tough this morning when I got up. I was like, ‘Dang, it’s my last day,’” Dormet said. “Obviously not easy but it’s a good day.”

Following suit were seniors Kolie Allen and Isabelle Boulais, who stayed on top of senior Tess Fisher and sophomore Alisa Prinyarux the entire match and won 6-1 on court one. The final doubles match was not completed, and Ohio State entered singles play with a 1-0 lead.

After securing first set victories on every court, the Buckeyes continued to roll over the Scarlet Knights. Marzal topped Cardenas 6-1, 6-1 on court five and No. 63-ranked freshman Sydni Ratliff won against senior Sydney Kaplan 6-1, 6-3 on court three to give the Buckeyes a 3-0 advantage, one point away from victory.

No. 9 Cantos topped Fisher 6-4, 6-0 on court one to push the score to 4-0. The remaining matches were left unfinished as Ohio State collected its trophy for winning the regular season title.