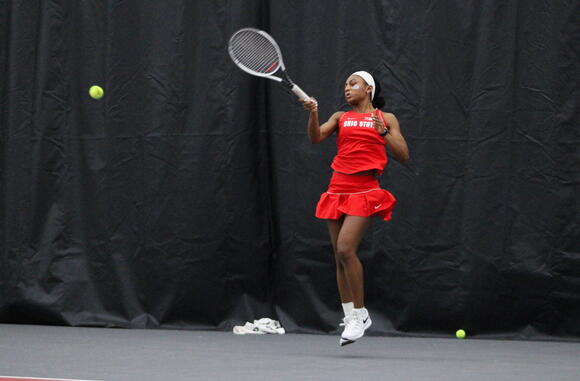 In doubles, both Maryland and Ohio State had their moments against each other. On court three, redshirt junior Kathleen Jones and freshman Sydni Ratliff were defeated 6-3 against junior Jojo Bach and freshman Francesca Feodorov. But the Buckeyes didn’t let up.

Seniors Kolie Allen and Isabelle Boulais competed alongside one another on court two, and their reunion proved successful as they took down junior Selma Cadar and freshman Mary Brumfield 6-2. With one doubles match left, the pressure for the point was on.

Juniors Irina Cantos Siemers and Lucia Marzal found themselves down 5-4 against sophomore Minorka Miranda and graduate student Marta Perez Mur after blowing a 4-1 lead. From there, they battled their way to a 6-5 advantage, one set away from winning the match.

Maryland, however, had other plans.

The Terrapins stormed back in the 12th match of the set to even the score 6-6, and in the final match showed no mercy, as they shut out the Buckeye duo 7-0 to win the match 7-6 and take the doubles point. Maryland led 1-0 heading into singles play.

“Doubles wasn’t our best but I think that’s gotten better,” head coach Melissa Schaub said. “I don’t think that was our best showing and we’re going to need to play better.”

Ohio State took the doubles loss to heart, playing with momentum on the court in singles. Ohio State won every first set across all singles matches to shift momentum back on its side.

Following her 6-1 first set victory, Allen didn’t stop against Brumfield, pulling in another 6-1 victory in the second set to even the score 1-1. No. 7 Cantos Siemers followed right behind her teammate, taking down Perez Mur 6-1, 6-2 to give Ohio State a 2-1 lead.

Allen said she was proud of the way the team bounced back in singles.

“When we come out and we lose a doubles point, we want to have really good starts in all of our singles matches so I think it was really good that we got out there and got all those first sets,” Allen said. “It takes a little bit of pressure off of us since we’re already down in the match score.”

But just as things were looking poor for Maryland, the tables turned yet again.

Following Cantos Siemers’ win, Boulais, Ratliff, Marzal and graduate student Luna Dormet fell behind in their second sets. Despite their best efforts, none were able to finish off their opponents in two sets, and each match was forced into a third set by the Terrapins.

Losing 5-4 in her second set, Dormet battled hard against freshman Kallista Liu, and after things were even 6-6 on court six, she brought things home and extended Ohio State’s lead 3-1.

“Luna getting it to a tiebreaker and winning that second set was huge for us because it’s 3-1 up,” Schaub said. “I’m really proud of how we’re competing and how we’re playing with our backs against the wall for sure. I just wish our backs didn’t have to get against the wall.”

The final two matches were played out, and Marzal was victorious over Feodorov 6-2, 5-7, 6-4 on court five while Boulais did not see the same success on court one. She was defeated 6-4, 4-6, 4-6 on court one after nearly coming back in the third set.

Ohio State’s final regular season match is Sunday at noon against Rutgers outside at the Auer Tennis Complex.