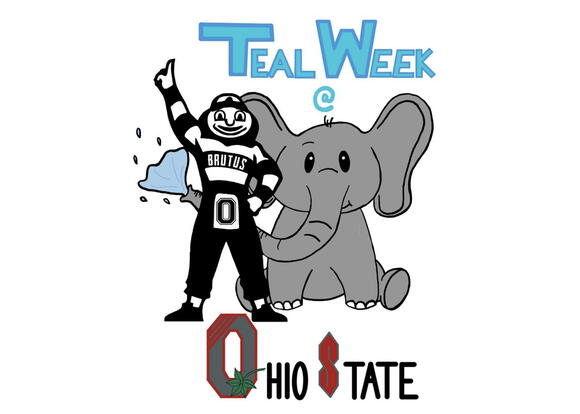 Teal Week is a new club that has a mission to help raise awareness of sexual violence and the necessity of consent education. Credit: Courtesy of Lauren González

Sexual violence awareness efforts can be found across Ohio State, but a new club hopes to address one of the main reasons sexual violence happens: a lack of consent education.

Lauren Gonzalez, a first-year in public management, leadership and policy, said she entered Ohio State with a mission to raise awareness of sexual violence and the necessity of consent education. As president and founder of the new club, Teal Week, Gonzalez has gathered a team of passionate and diverse individuals to help her make her mission possible.

“It’s important because even though it’s not as talked about as other issues like they should be, this is one of the most common threats that affects most people — no matter your age, gender, sexual orientation, your race, it doesn’t matter,” Gonzalez said in an email.

Teal Week is a national initiative started in San Antonio dedicated to educating students of all ages about sexual violence and consent, according to a petition from the group to include this education in Texas schools.

Teal is the color traditionally worn to show solidarity with survivors of sexual violence, according to the National Sexual Violence Resource Center website .

Jackie Roshetski, a first-year in political science, vice president of Teal Week and survivor of sexual violence, said the group plans to visit schools of all levels and provide a week of consent education, hence the name “Teal Week.”

Throughout April, Sexual Assault Awareness Month, the university has held events to educate students and raise awareness on sexual violence, according to the Student Wellness Center website. This included a keynote speech from athlete and sexual assault prevention advocate Kyle Richard April 7 on his experience raising awareness about sexual violence.

Teal Week will meet on Thursdays at 7 p.m. in the Ohio Union starting in the fall.

Roshetski said she is looking forward to the club officially beginning next school year, and she hopes people, especially survivors and victims of sexual assault, know there are people here to support them.