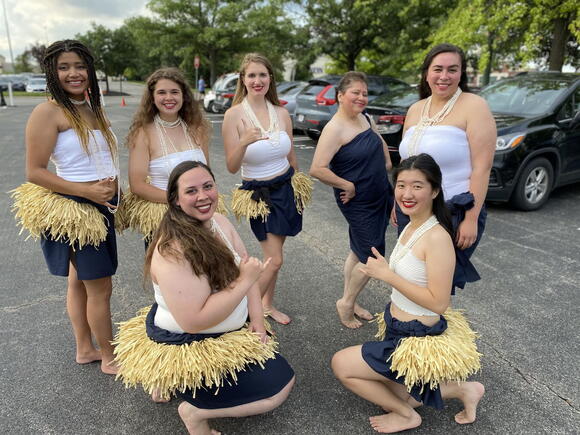 The Aloha Dance Club, established in April 2021, is finishing its first full year as a student-run Polynesian dance club focused on spreading awareness of Polynesian cultures through traditional dances, Devon Harvey, a fourth-year in medicine and co-president of the club, said. The showcase will take place at 6 p.m. at the US Bank Conference Theater in the Ohio Union.

The group aims to spread the Spirit of Aloha — the breath of life — throughout Columbus in the form of dance, according to its student organization page .

For the showcase, the group will present dances from Hawaii, Tahiti, New Zealand and Samoa, Selesitila Harvey, a graduate student in social work and co-president of the club, as well as Devon Harvey’s wife, said. According to the group’s Instagram , the showcase is called “E Tumau Le Vā Fa’aleuō,” or “How firm thy friendship” in Samoan.

“All of our dances are traditional to each of the islands that we’re representing,”
Grace Ma’ae, a first-year in athletic training and social media director for the organization, said. “In the Polynesian culture, our dances mimic whatever the lyrics — kind of like storytelling with the music.”

“It’s kind of a big collaboration, and we’re excited to be able to show that and spread the Aloha with everyone,” he said.

Aside from its spring showcase, the organization has several performance opportunities for members throughout the year, Devon Harvey said. The dancers held a fall semester showcase in December and also performed at events within the Columbus community such as at Ronald McDonald House in March, according to the group’s Instagram .

Due to the number of traditional dances and cultures touched on by the organization, preparations for showcases begin from the first week of the semester, Devon Harvey said. They take each dance in turn, waiting until everyone knows the dance before continuing on to another, he said.

“It’s been nice to be able to use those dances that [my dad] taught me and to teach it to other people to keep those dances alive,” Selesitila Harvey said.

Costuming is another aspect of the showcase that takes much of the semester to complete, Devon Harvey said. The dancers make their own costumes with money from dues, and they learn how to make them together, he said. However, having to ship materials from the Polynesian islands the costumes originate from — which involves customs and the potential for added fees — makes this feat even more difficult, Selesitila Harvey said.

“Although we aren’t able to get everything we need, we try to keep it as traditional as we can,” she said.

Devon Harvey said in addition to traditional garments, the dancers aim to incorporate other traditional costuming elements into their garb in the future, including the kōwhaiwhai, which is a pattern that represents a fern, and drawn-on face tattoos.

Anyone is welcome and encouraged to join the club and enjoy its performances, Devon Harvey said. The main goal of the organization is to share and teach others about Polynesian cultures, he said.

“We all come from Polynesian descent,” Selesitila Harvey said. “So this means a lot to us, but we love to share with everyone.”

Admission to “E Tumau Le Vā Fa’aleuō” is free, and cookies will be provided.