From Dostoevsky to Daphne Bridgerton, Ohio State community weighs in on book-to-screen adaptations 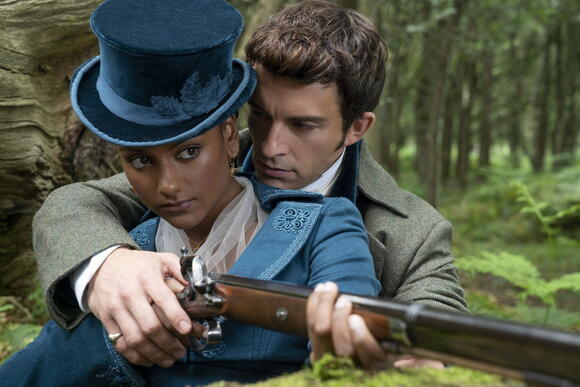 Following the release of season two of Netflix’s “Bridgerton,” Ohio State students and faculty weigh in on book-to-television series adaptations. From left, Simone Ashley and Jonathan Bailey in “Bridgerton.” Credit: Courtesy of Liam Daniel via TNS

Following the release of season two of Netflix’s “Bridgerton,” Ohio State students and faculty have weighed in on the pros and cons of taking beloved stories to the big screen.

Netflix’s drama series “Bridgerton” is a show based on “The Bridgerton Series” by Julia Quinn, with the second season — released March 25 — based off of the second book in the series, “The Viscount Who Loved Me.” However, avid fans of the series took to social media and were quick to point out scenes and plot points from the book had been changed .

Susan Hanson , an associate faculty member and lecturer in the Department of Comparative Studies, said book adaptations as a whole tend to come with too many expectations.

“For the most part, viewers tend to overrate — or over-expect — there to be more continuity between a written work and a subsequent adaptation,” Hanson said. “I think people make too much of it.”

Alexander Burry , an associate professor in the Department of Slavic and East European Languages and Cultures, said he has researched and written extensively about adaptations of the work of Fyodor Dostoevsky, a famous Russian writer who penned “Crime and Punishment.”

“There’s a combination of seeing something that you’re very familiar with in an adaptation and, at the same time, looking at it in a new way, whether it’s because it’s set in a different time, a different culture, a different country and language or all of these things,” Burry said.

Although many people enjoy both books and their television show or movie counterparts, Isaac Dickess, a first-year in pharmaceutical sciences, said the controversy surrounding changes made from page to screen poses an interesting question: What is an adaptation supposed to be?

“ It doesn’t have to be one-to-one with a story, but it has to [retain], like, the original story’s essence,” Dickess said.

Dickess said the well-known “To Kill a Mockingbird” is one of his favorite book-to-movie adaptations.

“I think it’s a perfect transition into that film format where it preserved the main essence of the original work while being suitable for a film adaptation,” he said.

However, Dickess said a one-to-one adaptation might not always be feasible because pacing can often become an issue when a book is split up into two cinematic parts, such as the last installments of the “Harry Potter” and “Hunger Games” film series.

“Having these long, drawn-out details, it may be accurate, but at the same time, if it’s not really necessary to the plot or pacing of the film, I think it’s worth cutting out,” he said.

Nicole Neifert, a fourth-year in neuroscience, said certain written elements such as internal dialogue do not usually translate well on screen, and the rise of book-to-television adaptations can still lead to disagreements among book lovers.

“I am a huge fan of the Harry Potter books, and I love the movies,” Neifert said. “They’re not necessarily my favorite adaptation, like in terms of how faithful they were, but I love both of them on their own.”

Balancing which elements from the source text make it on screen and which elements do not can often be difficult, and Neifert said any option has the potential to upset fans.

“I feel like turning a book into a TV show gives you lots of opportunities to, like, include all these things in the book, and that would satisfy the more ‘If it’s not in the book, I don’t want it’ type of people,” Neifert said. “But I feel like TV shows also require some amount of drama and extra things that probably wouldn’t show up in the book.”

Taking a novel and reworking it into a form of multimedia, whether it be a TV series or a movie, will essentially transform the work, and Hanson said it is interesting to think about and appreciate the choices directors make during that process.

“The work that they’re creating is a wholly new work,” she said. “It’s very similar, I would say, to when a novel gets translated, in that it’s not going to be literal; that a literal translation wouldn’t be readable in the same way.”

Despite personal preference, book-to-movie or television adaptations can be fascinating to watch because of the potential they have to compliment one another, Burry said.

“Look at those differences between book and film and ask what they mean,” Burry said. “How does the film reflect on the novel, and how can we reread the novel in light of what we get from the film? This is what I really like to do with all adaptations.”