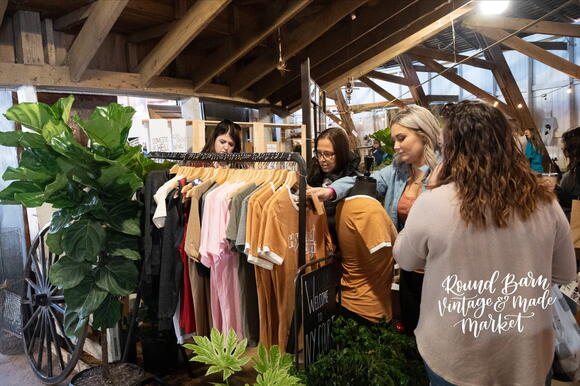 Attendees peruse merchandise at a past market event organized and hosted by Vintage & Made Market. Credit: Courtesy of Krista Richards

The imminence of May might have students already dreaming of summertime, but Vintage & Made Market aims to alleviate any spring semester stressors with “A Spring Gathering.”

Owned and operated by mother-daughter duo Denise Griffith and Caitlin Perdew, Vintage & Made Market puts on six open-air barn markets a year and will host the “A Spring Gathering” market April 29 through May 1 at the Franklin County Fairgrounds, according to its website. After considering nearly 500 applications, Vintage & Made Market selected more than 120 vendors for the event, Perdew said.

Perdew, a 2011 Ohio State alumna, said she grew up in her mother’s brick-and-mortar store, FYN & Co. Mercantile , which allowed her to appreciate small enterprise. After a decade of traveling to open-air markets, Perdew said she and her mother wanted to organize markets for their local community, and, thus, Vintage & Made Market was officially established in 2017.

“We wanted to bring our friends that we had met as vendors,” Perdew said. “We wanted everybody to come together where we lived.”

Perdew said the primary goals of Vintage & Made Market are to bolster the local economy and facilitate relationships between buyers and sellers. Although corporations such as Target or Amazon are massively convenient, she said the dynamic of personalized exchange cannot be beaten.

“We feel like a dollar spent, or any type of engagement spent on makers and pickers that are local, is tripled in value,” Perdew said. “It’s just a feel-good atmosphere.”

Each of the makers, pickers and purveyors at the market will offer a wide range of goods and services such as hand-poured candles and customized calligraphy, Perdew said. Vintage enthusiasts will be able to shop everything from architectural salvage to antique collectables at the spring market, she said.

Curated small businesses such as The Hippie Thread and Henry Lee Herbal Co . will be in attendance, in addition to musicians such as Jared Foster and food vendors such as Biscuit Boss , The Crazy Cucumber and Island Noodles , she said.

“We have people from literally everywhere set up and vend,” Perdew said. “We want people to be able to come meet the person who made the product.”

Courtney Hart, co-owner of Ivy Court , said her business will be one of the featured retailers for “A Spring Gathering.” She said she co-owns the shop with her husband, Ryan, and specializes in houseplants, hand-pressed textiles, wall art and stationery.

“We do all kinds of different workshops in the community so that people can learn a new trade or hobby,” Hart said. “People find things that make them smile, bring them joy and make them feel good.”

Hart said a stage-three breast cancer diagnosis in 2019, followed by months of brutal treatment, pushed her to abandon the corporate world and launch Ivy Court in Circleville, Ohio, in July 2020.

“I told my husband that I was never going back to work if I survived and that I was going to do something that I loved every day,” Hart said.

Since then, Hart said two additional Ivy Court stores have sprung up in Clayton and Troy, Ohio, with further expansion on the way. She said markets such as “A Spring Gathering” allow small businesses to thrive in the Midwest and beyond because when consumers shop locally, entrepreneurs can give back in turn.

“Until you run a business, you don’t realize what a heartbeat small businesses have in your community,” Hart said.

As an Ohio State alumna, Perdew said she hopes current Ohio State students will attend the event and be able to experience the thrill of a miscellaneous market firsthand.

“It’s kind of like when you plan your wedding,” she said. “We just want to share the experience with as many people as we can.”

General admission tickets for the handicap-accessible event can be purchased for $5 in person at the Franklin County Fairgrounds, located at 4951 Northwest Parkway. The market will be open from 10 a.m. to 4 p.m. April 29-30 and 10 a.m. to 3 p.m. May 1.

More information about the market and special tickets can be found on its Eventbrite page.