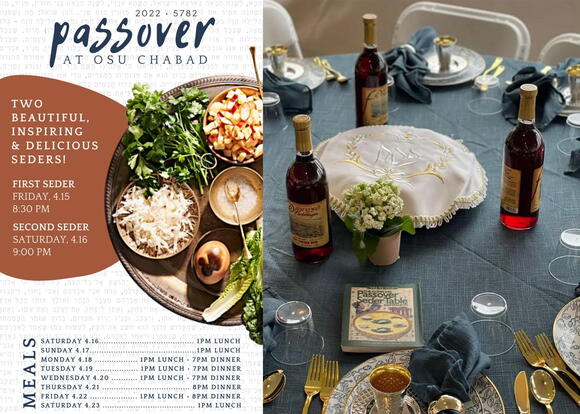 Whether Jewish students are 50 or 1,000 miles from home, groups on campus such as the Schottenstein Chabad House and Ohio State University Hillel hope to make them feel at home during Passover.

Sarah Deitsch, program director at the Chabad House, said it can be difficult for Jewish students to celebrate Passover on campus, which is why groups like Chabad are important.

“They live with other students who don’t observe it, or they live with non-Jews who don’t understand it, in dorms where they can’t cook their own food, so it’s a struggle,” Deitsch said. “We know it’s not easy. The university doesn’t provide a ‘kosher for Passover’ cafeteria or anything like that.”

People celebrating the holiday eat kosher — food that complies with the dietary rules of Judaism — for Passover, excluding chametz, or any grain-based food made with a leavening agent, which are forbidden during Passover.

The Chabad House is offering 12 meals during the week, including free daily lunches, Deitsch said. More than 270 students attended the Chabad Seder Friday and Saturday, 45 attended Monday dinner and 20, on average, attended the lunches.

Passover, one of the holiest Jewish holidays, celebrates the liberation and exodus of Hebrews from slavery in Egypt, Deitsch said.

“Passover is important because it’s the birth of a nation,” Deitsch said. “So, all the foods that we eat at the Seder night, and throughout the eight days of Passover, are symbols of the experience that the Jews had in Egypt.”

Seder, meaning “order” in Hebrew, is the ceremonial dinner for the first two nights of Passover, according to the Chabad.org website . There are six foods on the Seder plate, including a hard boiled egg, a burnt bone and a bitter herb, which are eaten in a specific order.

Sam Fingerhut, a second-year in public management, leadership and policy, said Passover is an important holiday for Jewish people, and he enjoys getting to gather with his friends for the holiday’s events.

“This holiday period, a lot of people have been coming out, coming together and really trying to observe this holiday together,” Fingerhut said.

Jordan Vandersluis, a first-year in speech and hearing science, said although ​it can be difficult to keep kosher for Passover at a secular college like Ohio State, she is glad there are outlets for her to stay close to her faith.

“I do really like that I’m getting to find my own way of still celebrating the holidays and still being extremely connected to my Judaism on a secular campus,” Vandersluis said.

Deitsch said it is important for Jewish students to continue to celebrate the holiday they’ve known growing up. She said she is glad the Chabad House can offer an outlet for these students to follow the holiday’s traditions.

Vandersluis said she is thankful for the meals provided by Chabad and finds them extremely helpful while navigating dorm life.