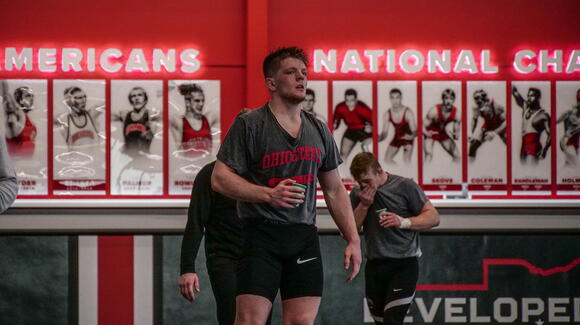 Even the top incoming freshmen at the NCAA level often take a redshirt season, and Paddy Gallagher is no exception, arriving in Columbus as the No. 1 overall recruit in the country in 2021.

Some wrestlers take the redshirt year to get stronger, while others take one to get more technically sound. For Ohio State head coach Tom Ryan, a redshirt year is all about getting a wrestler prepared for the next level.

That’s what he hopes happened for Gallagher.

“It’s just another level despite the fact that you come in as a top recruit in the country,” Ryan said. “Everything is just happening faster, people are stronger, they make decisions more quickly, they are more tactical, they’ve been in more battles and it’s hard to beat someone that’s been in 100 battles when you’ve been in two or three, so we’re excited about Paddy.”

While Gallagher wished to have been in the lineup as a true freshman, he said he still enjoyed his redshirt year and wrestling unattached at open tournaments.

“It was good. I had a couple of little injuries throughout the season, so I had to go to opens dealing with those,” Gallagher said. “It’s pretty tough watching the duals happening and you’re kind of just sitting there, but besides that it was good.”

Wrestling at 157 pounds, Gallagher spent a lot of his redshirt year practicing with two-time All-American and the Buckeyes’ current 149-pounder redshirt junior Sammy Sasso. Sasso also took a redshirt year and knows just how it can help Gallagher going forward.

“That redshirt year is just really a time where you can get a lot from the coaches and you’re not competing as much, so you can just get a lot of extra work in,” Sasso said. “Going through that redshirt year you’re going to work out a lot of the kinks you need to fix. He’s got all the skills to be really successful at this level, then it’s just fine-tuning them and making it happen.”

According to Gallagher, Sasso was also one of the people in the Ohio State wrestling room helping him fine-tune his skills.

“He taught me how to, we call, continuous wrestling. Just learn how to scrabble and not give up points not so easily,” Gallagher said. “He’s a tough dude though, so just learning from him technically and mentally.”

Having wrestled Gallagher so often this year, Sasso said he knows just what he is capable of as a redshirt freshman next season, and he is excited to see what Gallagher does next year.

“I got to wrestle with Paddy a lot this year. He’s a tough kid, hard-nosed. He wrestles hard and he’s physical. He’s got all of the means to be really successful in this sport,” Sasso said. “He’s just got the hand-fighting, the chain wrestling, and he puts a lot of moves together. I’m excited once he gets into a season and starts finding his groove.”

Ryan also believes Gallagher could have a big redshirt freshman season and said he even sees some similarities between Gallagher and a recent Ohio State wrestler who also broke out in their first season of competition.

“He kind of reminds me of Kollin Moore. Kollin Moore’s freshman year he didn’t blow anyone out of the water, but we saw his workload, we saw his capacity to learn and his desire to work,”  Ryan said. “Kollin went from a very good redshirt year to be a guy fighting for a national championship, and that’s what we need to see out of Paddy and I believe we will.”

Next up for Gallagher will be winning the 157-pound spot in the Ohio State lineup, a spot in which multiple wrestlers filled in for the Buckeyes last season.

If he is able to fill that spot, Gallagher said he is excited to wrestle in front of the crowd at the Covelli Center after not having that last season.

“I’m going to be in the lineup and I’m really excited to just compete and have fun in front of big crowds,” Gallagher said. “It’s pretty boring going to those opens. No crowds, so I’m excited to get in front of some fans.”