Men’s Tennis: No. 2 Buckeyes earn rivalry win against No. 7 Michigan 4-1 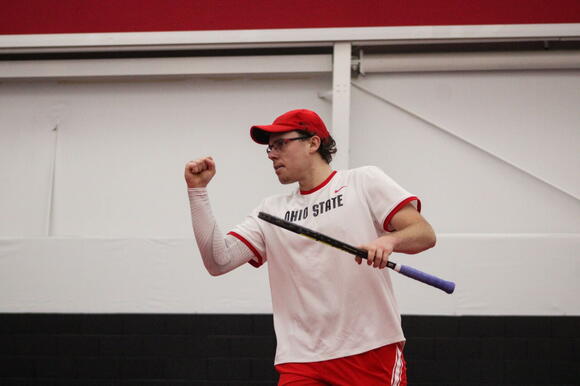 Rivalry week brought a season-high crowd to the Ty Tucker Tennis Center Friday, and they weren’t disappointed as No. 2 Ohio State emerged victorious against No. 7 Michigan 4-1.

The match was a test of resilience for the Buckeyes (21-2, 6-0 Big Ten), finding themselves in four separate three-set matches on the day. The Wolverines (16-3, 6-1 Big Ten) took one such match with Ohio State taking one other and the remaining two going unfinished.

Michigan was responsible for one of Ohio State’s two losses on the year, taking a match in Ann Arbor 4-0 March 18. Head coach Ty Tucker said getting the win back is nice, but beating a rival is always a challenge.

“It feels good, but nothing’s easy,” Tucker said. “We got to three quickly, won a tough doubles point, we haven’t won a doubles point against Michigan in the last four matches so that doubles point is key.”

The Buckeyes set the tone in doubles early as redshirt junior Andrew Lutschaunig and junior Justin Boulais never trailed en route to a 6-4 win. Both of the other courts stood at 5-5 before No. 1 graduate Matej Vocel and junior Robert Cash broke the serve of No. 23 senior Andrew Fenty and sophomore Nino Ehrenschneider and carried their momentum to a 7-5 victory.

Going into singles, No. 112 graduate Jake Van Emburgh capitalized early, taking a 6-1 first set and closing out No. 83 sophomore Gavin Young 6-3. Van Emburgh’s night wasn’t over however, leading the crowd in cheers and keeping the energy up as matches went on.

“When [Michigan] is on the road, they’re super vocal, so you got to be able to match that as a top team,” Van Emburgh said. “If you don’t come out there with that energy and that will, then it’s hard to win anywhere.”

No. 19 sophomore JJ Tracy opened up 3-2 before pulling away to a 6-2 first set and riding his momentum to a 6-3 second set and the win against No. 55 Fenty. Tracy played the match at Singles 2, a first for him this season.

The next point scored was that of No. 46 sophomore Jacob Bickersteth, taking down No. 106 Cash in the first three-set contest to finish. Bickersteth battled from a 2-6 first set to win the final two 6-4, 6-1 and secure the lone Wolverine point of the day.

Closing out the match was No. 11 junior Cannon Kingsley, coming back from a 3-6 first set loss to No. 25 Ondrej Styler to capture the second 6-4. Remaining in control, Kingsley clinched the Ohio State victory with a 6-2 final set.

Now the sole team with an undefeated conference record, Ohio State sits alone atop the Big Ten with three matches left to play. However, Tucker said the team has plenty of work to do.

“It doesn’t mean anything,” Tucker said. “We’ve got stuff to do on Sunday against Michigan State, then we got a weekend to go at Wisconsin and Nebraska. We’re in the lead right now but you can’t take anything for granted.

The Buckeyes return to the courts Sunday to take on Michigan State at home, beginning at noon and streaming on the Ohio State Buckeyes website.