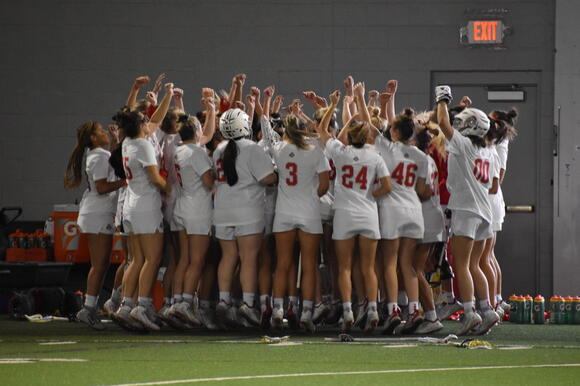 Ohio State senior attack Chloë Johnson scored three goals in a row after fifth-year midfielder Lindsay Epstein scored the opening goal to lift the Buckeyes to a 4-0 lead at the end of the first quarter.

The flurry of scoring marked Johnson’s fourth career hat trick and third in a row in her record-breaking season as she earned a selection to the Inside Lacrosse/IL Women Midseason All-America Third Team April 1 and set the program record for draw controls in a single season — standing with 104.

The Buckeyes led at halftime 5-2 after freshmen midfielders Julia Schwabe and Jill Smith found the back of the net for the Wolverines in the second quarter.

Ohio State senior attack Jamie Level also recorded three goals for the Buckeyes with one each in the second, third and fourth quarters.

The Buckeyes were backed up by sophomore goalie Regan Alexander, who recorded five of her 10 saves in the first quarter.

The Wolverines fought back to trail 6-5 in the third quarter before Level put back-to-back goals in the net to extend the lead.

Epstein led with three of the Buckeyes’ eight turnovers.

The Buckeyes will return to Columbus to host No. 9 Maryland at Ohio Stadium April 17 at noon. The game will be televised on Big Ten Network.