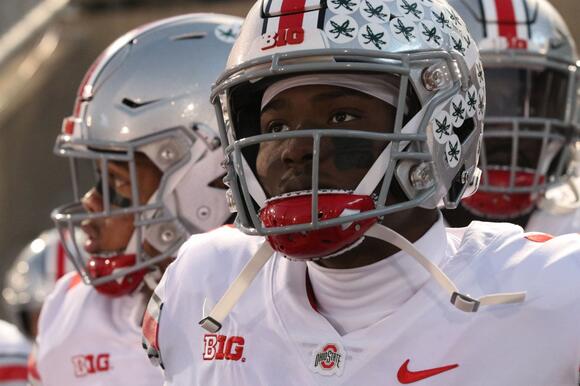 After news broke about the sudden death of former Ohio State quarterback Dwayne Haskins, several Buckeyes coaches and players took to Twitter to share their condolences and memories of their time with him Saturday.

Haskins joined the Ohio State program in 2016, entering a locker room helmed by head coach Urban Meyer. In his time at Ohio State, Haskins shattered program and Big Ten records while leaving his mark on the Columbus community.

“Heartbroken to hear of the loss of Dwayne Haskins Jr. My thoughts and prayers go out to his incredible family,” Meyer tweeted. “One of the greatest QB’s in Ohio State history, but an even better son, teammate, and friend. God Bless!!”

During his breakout 2018 season, Haskins was coached by then-offensive coordinator and quarterbacks coach Ryan Day, who ascended to head coach following the conclusion of that season.

“The loss of Dwayne is beyond tragic and extremely difficult to process. For those who knew him closely, Dwayne was much more than a great football player,” Day tweeted . “He had a giant heart, old soul and an infectious smile. The Ohio State community and our entire football program are heartbroken.”

“Shocked and saddened by the devastating news about Dwayne,” Smith tweeted. “He was a legend on the field and truly a tremendous human being. Prayers to the Haskins’ family.”

While with the Buckeyes, Haskins forged connections with several of his Ohio State teammates — especially his receivers.

“I love you forever,” Campbell tweeted. “Miss you Simba.”

Denver Broncos defensive end Jonathon Cooper was in the same recruiting class as Haskins and shared a photo of him and the Potomac, Maryland, native from their time as Buckeye prospects.

Los Angeles Chargers safety Jordan Fuller, who was roommates with Haskins at Ohio State, reminisced on the time he spent with the quarterback.

“One of my college roommates.. we played in the same 8th grade all star game… we talked about a reunion trip during one of theses off-seasons, it felt like we had time,” Fuller tweeted.

“I will love and miss you dearly friend! I’m glad I’ve gotten to know you through football, but everyone who knows you knows you were so much more than an athlete,” Jordan tweeted. “You were a great Brother, friend, son and husband. You will be truly missed.”

Pittsburgh Steelers defensive end T.J. Watt tweeted about the first time he met Haskins after he joined the Steelers in 2021.

“The world lost a great person today. When Dwayne first walked into the locker room I could tell he was an upbeat guy,” Watt tweeted. “He was always making people smile, never taking life for granted. His impact on me will last a forever.”

Pittsburgh Steelers head coach Mike Tomlin, who coached Haskins in 2021, shared his condolences in a statement.

“I am devastated and at a loss for words with the unfortunate passing of Dwayne Haskins. He quickly became part of our Steelers family upon his arrival in Pittsburgh and was one of our hardest workers, both on the field and in our community,” Tomlin said. “Dwayne was a great teammate, but even more so a tremendous friend to so many. I am truly heartbroken.”

Washington Commanders co-owners Dan and Tanya Snyder, who played a key role in drafting Haskins in 2019, also released a statement regarding the quarterback’s passing .

“He was a young man with a tremendous amount of potential who had an infectious personality,” the Snyders said. “To say we are heartbroken is an understatement.”