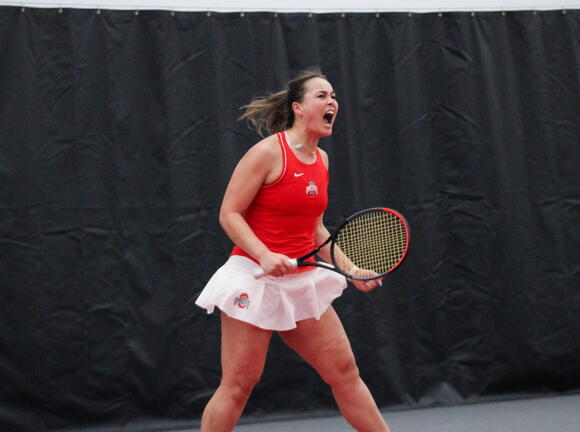 Heading into Friday’s match, No. 7 Ohio State was ready for a rebound after last year’s loss to No. 37 Northwestern.

Head coach Melissa Schaub said she hoped for better in doubles, but was thankful the team still got the win.

“They’re very good at doubles — we knew that coming in,” Schaub said. “Didn’t play our best, but I think we did what we could out there. I think we took care of business for the most part in singles so that felt good.”

In doubles, the Buckeyes and the Wildcats traded blows as the matches went on. Neither team could take an advantage in the early stages.

But the Wildcats didn’t give up.

The No. 78-ranked duo consisting of senior Clarissa Hand and sophomore Maria Shusharina defeated senior Kolie Allen and freshman Sydni Ratliff 6-4 on court five. With each team claiming one doubles match, the final match would decide the point.

The Buckeyes started off singles strong, winning five of six first sets, including a set win from No. 7 Cantos Siemers over No. 118 Clarissa Hand 7-6. Cantos Siemers won her last game in that set 9-7. Merely ten minutes after Cantos finished her grueling first set, No. 56 Ratliff finished her match: a triumphant 6-4, 6-1 victory over Pratt on court three to even the score at 1-1. No. 32 Boulais followed suit, winning 6-0, 7-5 over Shusharina on court two to extend the Buckeyes’ lead 2-1.

Graduate Luna Dormet hasn’t been on the court for the last six matches, but she made her presence known Friday. A 6-2, 6-2 win from her over freshman Justine Leong on court six put Ohio State up 3-1, with three matches left to be played.

But still, the Wildcats did not give up.

Christina Hand knocked off Marzal 6-2, 7-5 on court five to cut the lead down to 3-2 in favor of Ohio State. Two matches remained unfinished.

Cantos Siemers made it clear against Clarissa Hand that she did not want a repeat of their first set. She jumped out to a 5-1 lead, hoping to clinch the match for Ohio State. Clarissa Hand wasn’t so set on that result, however.

She won the next two sets to make the score 5-3 in favor of Cantos Siemers, but Cantos Siemers ultimately took the upper hand in the ninth set, winning the match 7-6, 6-3 on court one to clinch the win for the Buckeyes. Shortly thereafter, Allen tacked on another win for Ohio State, topping graduate Ema Lazic 6-4, 7-5 on court four.

Ohio State walked away with a 5-2 victory to continue its unbeaten streak in the Big Ten and inside the Ty Tucker Tennis Center.

Cantos Siemers said she was proud of the team after the hard-fought match and the loss last year.

“I think that’s something that we do really well. We bounce back from anything really and that’s what we did today,” Cantos Siemers said. “We didn’t play like we wanted to in doubles and they have a really good doubles, but we came out there, we won five first sets so that’s huge.”

The Buckeyes will travel to West Lafayette, Indiana, to take on Purdue Sunday at noon. Live streaming and scoring will be available if the match is played indoors on Purdue’s website.