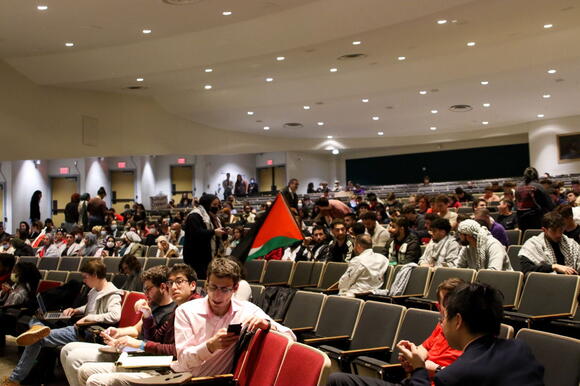 The Undergraduate Student Government passed an emergency resolution that looks for Ohio State to divest from two companies it says contribute to human rights violations against Palestinians during a General Assembly meeting Wednesday.

Around 200 people gathered in Independence Hall during the meeting in which senators voted on the bill. The resolution, which passed with 14 votes in support, eight votes against and two abstentions, was voted on by secret ballot at 10:23 p.m. — 22 minutes before the building closed.

Khalid Dada, a third-year in public policy analysis and a senator in support of the bill, said he woke up thinking this resolution would never be heard.

“I don’t know how I feel right now,” Dada, co-president of the Muslim Student Association, said following the vote. “But I know it feels great.”

According to a copy of the bill obtained by The Lantern, the sponsors — Sens. Rama Naboulsi, Yondris Ferguson, John Fuller and Suhavi Salmon-Rekhi — look for the university to divest from Caterpillar Inc. and Hewlett Packard Enterprise.

The resolution stated Hewlett Packard Enterprise has provided technology used by the Israeli military “which facilitate discrimination against Palestinians, restrict their freedom of movement, and limit their access to education, employment, and medical care.”

Hewlett Packard Enterprise did not respond to a request for comment by the time of publication.

“By investing in such companies, The Ohio State University implicitly condones and profits from the decisions and actions of these companies, and, as such, becomes guilty by association when such consequences from the actions and divestments of these companies, including, but certainly not limited to, the killing of innocent civilians,” the resolution stated.

Caterpillar Inc. did not respond to a request for comment by the time of publication.

University spokesperson Ben Johnson said in a statement the university’s endowment is not funded with tuition or fees, and the university “encourages students, faculty and staff to engage in discussion and debate.” He said Ohio State also complies with all state laws regarding investments.

Wednesday’s meeting, which began around 7 p.m., came a week after around 200 people assembled in the Performance Hall at the Ohio Union March 30 to testify both in support and opposition of the emergency divestment resolution.

As an emergency resolution, the bill was not on the General Assembly’s schedule for the March 30 assembly, but it would have been introduced and discussed during the meeting regardless. However, after over 50 students and Columbus community members spoke for more than three hours in a public forum, the meeting was adjourned, as the Union closed at 11 p.m.

Similar to the March 30 meeting, students gathered at Wednesday’s meeting to voice their opinions on the resolution in an open forum. However, senators voted to put the resolution ahead of open forum on the agenda.

Senators also proposed that Fuller, the USG parliamentarian who recently came under fire for a comment he made about race during a previous USG meeting, be impeached. The impeachment resolution, which was brought forth about an hour into the meeting, did not pass.

Sydney Goldberg, a fourth-year in occupational therapy, said she is worried about how the approval of this bill will affect the treatment of Jewish students on campus.

“The lives of every single Jewish student on this campus has now been put at risk. Anything that comes of this falls on the responsibility of this general body,” Goldberg said.

Following the passing vote, some students stayed to celebrate, while others left Independence Hall shortly after.

Jeremy Davis, a third-year in information systems and an alternate USG senator, said he opposed the bill because he felt it did not address the conflict’s issues.

“I don’t feel that divesting from companies is being pro-solution,” Davis said. “Why not invest in Palestinian companies to really boost their economy?”

Angelina Atieh, a second-year in biomedical engineering and president of Students for Justice in Palestine, said that student activists have tried to pass a divestment resolution at Ohio State for a decade, and she is elated that it has now been accomplished.

“To get the stamp of approval from the student body that human rights violations in Palestine are wrong, and we condemn those and we want the university to do something about it — that cannot be understated,” Atieh said. “And this is the ultimate show of approval and support to the Palestinian community. And to me, as a Palestinian, it means the world.”

Dada said the sponsors of the resolution understood that this divestment would take years and that it was not over after the passing of this resolution, so his focus right now is working with the administration to figure out what’s next.

“Our plan is to go and raise this resolution to University Senate; that’s kind of where our head is at and where we want to take this, and that is our specific target for what we’re looking for,” Dada said.

Update: This story was updated April 7 at 12:17 p.m. to include additional student opinions on the resolution.