Columbus Arts Festival to return this summer for 60th anniversary 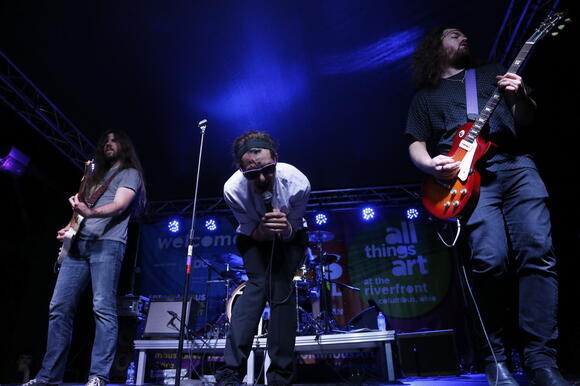 Live music, food vendors and local artists will come together June 10-12 at the Scioto Mile riverfront for the Columbus Arts Festival. Credit: Courtesy of Joe Maiorana.

The Columbus Arts Festival — known for showstopping live performances, various vendors and delicious food — will return to the city June 10-12 after a two-year hiatus due to the pandemic.

The festival began 60 years ago on the Ohio Statehouse lawn as a smaller art fair and has since grown into a large-scale arts festival put on by the Greater Columbus Arts Council at the Scioto Mile riverfront. This year, the festival will partner with various organizations such as American Electric Power, Rhinegeist Brewery and Gateway Film Center.

“We’ve got over 200 artists this year from around the country,” Sean Kessler, director of the festival and a 2002 Ohio State alumnus, said.  “I think it’s 34 or 35 states and Canada being represented by all those artists, and a bunch of them are local.”

Kessler said the festival is known for its appreciation of local artists but will also include art and performances from artists around the country. This year, there will be three different stages and a variety of live performances for audience members to engage with at the festival, he said.

“We’ll have kind of a main stage in Bicentennial Park that’ll be music and dance and theater,” Kessler said. “We have a ‘Big Local’ stage that plays only local music all day, every day of the festival. And then we have a spoken word and acoustic lounge that we’re really excited about.”

Canceling the festival during the 2020 and 2021 seasons was a difficult decision, but Kessler and Jenica Richards, the festival and special events coordinator for the arts council, said they decided it was in everyone’s best interests to do so.

“She and I just really had to pivot and do our best to start planning for 2022 — when we knew we could do it,” Kessler said. “We were really lucky with a lot of our sponsors that stuck by us, and we didn’t have to cut anybody because of that.”

Kessler and Richards are the only two full-time staff members for the Columbus Arts Festival, and Kessler said the festival is heavily dependent on volunteers.

“We kind of build a city in a few days and tear it down in a couple of days,” he said. “And that can’t happen without the volunteer committee and all the volunteers that come down for the weekend.”

Donna Estep , a local artist and one of the leaders of Cap City Creatives , said she has been a volunteer for the festival’s “Big Local” tent for nine years. Her experience volunteering for the festival has given her more exposure to the local arts community, she said.

“It’s kind of a great way to get right there on the pulse of what happens in Columbus,” Estep said. “GCAC does so much for the artists themselves.”

Aside from gaining exposure to new and upcoming local artists, Estep said she also finds great joy in the work she does.

“Volunteering to do the arts for me, it’s not work, it’s my heart,” Estep said. “That’s one of the big reasons I want to volunteer, because I want to see the art scene, you know, continue to grow.”

Estep is excited to see local artists gain more exposure through the Columbus Arts Festival once again and said patrons should expect great things from this year’s event.

“There’s a lot of booths for local arts groups. I believe usually BalletMet and some of the other really wonderful organizations that are here in Columbus are all represented, as well as the arts,” she said. “So I think part of this, you know, the size and the location, you just can’t beat.”

More information about the Columbus Arts Festival can be found on the website , and those interested in volunteering for the festival can register through Experience Columbus’ website .