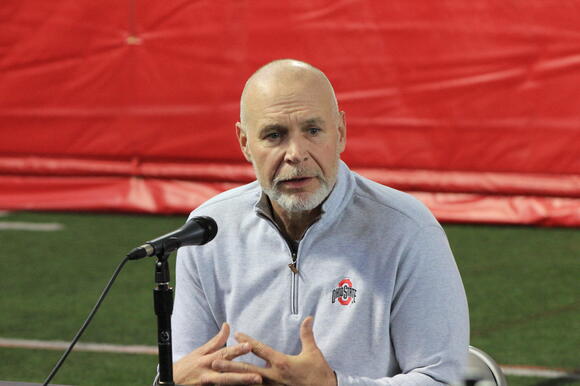 With over a decade of experience as a defensive coordinator, Knowles has implemented a “Leo” position with a defensive lineman, moving that player around in position from play to play. The “Leo” could line up as a weak side defensive end or move inside and closer to the offensive guards or even bounce back into coverage as a linebacker.

The Buckeyes could likely install Knowles’ idea of a hybrid linebacker, and he said they began introducing it March 29. However, the new concept is still in its beginning stages.

The hybrid linebacker serves a critical role in pass rushing and run stopping, bringing an emphasis to their combination of physical size and mobility.

Knowles joined Ohio State Jan. 2, and he said he’s used a push-and-back-off approach when introducing new defensive concepts and schemes early. That hasn’t stopped him from gaining impressions of which Buckeyes could fit in the hybrid position, and he said he wants to find someone who can be productive and agile.

“Once you got the guy moving around, you got him in different places; now you see how the offense adjusts to that and their schemes and you can come back with other things and counter in the passing game,” Knowles said. “That player is productive and in terms of the pass rush because I think they develop a mentality. They develop a mentality of being kind of a wildcard, being a guy who makes plays.”

The “Leo” began with former defensive lineman Jason Babin when Knowles coached at Western Michigan from 1997-2002. Babin originally played running back in high school but suffered a leg injury before entering the college ranks.

Knowles then carried the hybrid linebacker scheme to Oklahoma State from 2018-21.

“We had some great examples from Oklahoma State with guys that would go in there and tackle both the running back and the quarterback and just be real, real disruptive, so there’s a lot of film,” Knowles said. “[Babin] wasn’t your typical defensive lineman and it just started to occur to me that I should try some different things with him, and he just kind of grew from there.”

Knowles has already identified several Buckeyes who could play the “Leo” position next season, highlighting sophomore linebacker Mitchell Melton as someone who’s jumped out to him. Melton has played just one game since arriving at Ohio State as a four-star recruit from Silver Spring, Maryland, in 2020 but dealt with an injury that sidelined him for all of last season.

Freshman defensive end Jack Sawyer was among the first Buckeyes to take part in “Leo” drills, and while much of the position hasn’t been implemented yet, he said the way Knowles teaches his idea of the defense has intrigued him.

He added the defensive scheme with the “Leo” position involved is strategic, but how much it will be in use is “yet to be determined,” although he is interested in the effects it presents to opposition.

“While you have the ability to line up with four-down spacing, now you can change to more than three-down with that position,” Day said. “Then you can kind of change the angles of the blocking and the double teams. Anytime you do that, now the offensive line is unsure of themselves, but we’re keeping it consistent for the other guys on the field, which is great.”

The Buckeyes hope to gain improvement in their defense that finished ninth in total defense last season, allowing 372.9 passing yards and 126.8 rushing yards per game.

The Cowboys finished with the ninth-best scoring defense a season ago, allowing just 18.1 points per game. Now under Knowles as defensive coordinator, Ohio State’s defense could be in line for adjustments — with the “Leo” as a potential catalyst.

“I’m really looking for guys that can be disruptive, sometimes fit yourself into small spaces, looking for those hips,” Knowles said. “You’re looking for the guy who can turn the corner, real fluid in his hips, and can make plays really between the tackles. You got to be tough.”