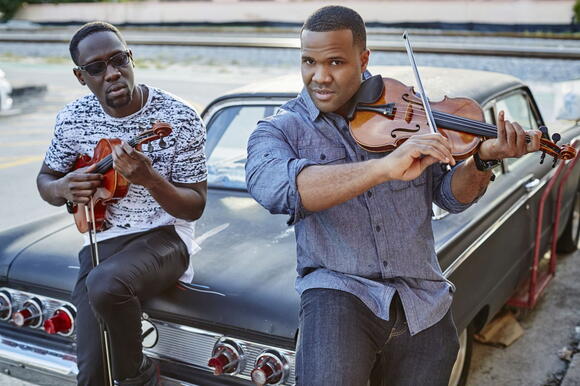 The band Black Violin will make a stop at the Palace Theatre Friday as a part of the duo’s ongoing “Impossible Tour.”

The classically trained string duo consists of Wil B. on the viola and Kev Marcus on the violin. The duo combines their training with hip-hop influences to create a unique sound in albums such as “Take the Stairs,” released in November 2019.

As part of the “Impossible Tour,” the duo will be joined onstage by DJ SPS and drummer Nat Stokes. Black Violin’s goal is to foster musical education and champion the idea that people are not limited by circumstance, according to the event website.

The duo combines their training with hip-hop influences to create a unique sound in albums such as “Take the Stairs,” released in November 2019.

Tyana Woodard, a member of Black Violin’s management team, said B. and Marcus met in their high school orchestra class in Broward County, Florida, and then reconnected after college. Woodard said the two gained popularity after winning the talent show “Showtime at the Apollo” in 2005 and have continued to play together for more than 17 years.

“They started making beats for local rappers and started mixing the classical training with those hip-hop beats and got themselves into ‘Showtime at the Apollo,’ ” Woodard said. “It was a great thing that kick-started their career.”

Rich Corsi, vice president of programming for the association, said this is the third time Black Violin has performed in Columbus, having put on popular performances in the city in the past.

“It’s been a pretty successful thing for CAPA; it’s been very successful for Black Violin,” Corsi said. “Columbus has an appreciation for theater, so we’re fortunate enough to have these venues and have groups like this who are on tour, to be able to bring them back.”

Black Violin will be performing at the Palace Theatre because it is one of the largest theaters in Columbus, seating a maximum of 2,700 people, Corsi said. During the duo’s first tour in October of 2018, Corsi said the group quickly sold more than the 900 seats available in smaller Columbus theaters such as the Southern and Davidson theatres.

Corsi said the association has a good relationship with Black Violin, and the group has enjoyed performing in Columbus in the past.

“It’s kind of cool when you have a relationship with artists like Black Violin because when they come to Columbus it’s like a little bit of home,” Corsi said. “They come in, they know the crew, everybody’s happy to see each other and it makes for a great day, and then it just parleys into the performance, and every performance they’ve done here they’ve blown the crowd away.”

Corsi said Black Violin stands out compared to most performers who play in Columbus because of the rarity of combining strings with hip-hop beats.

“Traditionally, we have a lot of rock bands that come through,” Corsi said. “We also do a lot of dance and symphonic programming, so there’s a lot of that stuff — I don’t have six or seven violin shows, so it’s a unique piece.”

Woodard said she respects the duo because of their genuine nature and their love of performing and teaching people about music.

“They care a lot about empowering youths, breaking stereotypes and thinking outside the box,” Woodard said. “With their music, their goal is not only to entertain, but to uplift everyone who comes into the shows, and they want them to feel inspired when they leave.”

Black Violin will perform at the Palace Theatre, located at 34 W. Broad St., Friday at 7:30 p.m. Tickets to the duo’s performance start at $25 and can be purchased on the Columbus Association for the Performing Arts’ website .