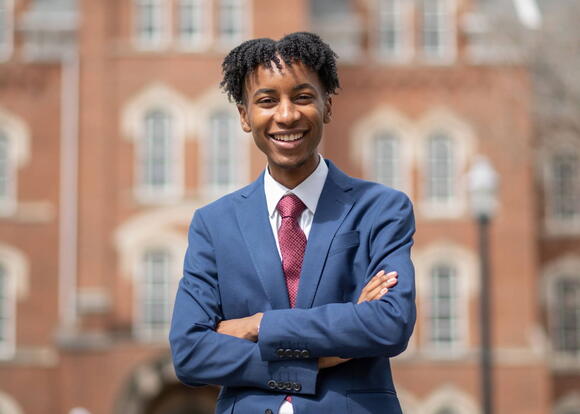 The General Assembly approved Derek Moore, a third-year in business administration, with a 16-0 vote for vice president. Credit: Courtesy of Derek Moore

“If I feel accomplished as a leader at the end of USG is I would feel like the organization has grown, and that includes the trust in USG to carry out the advocacy on behalf of the student body,” Moore said.

The appointment comes after former Vice President-elect Shayanna Hinkle-Moore resigned March 18, noting the job would be detrimental to her mental health.

Hinkle-Moore’s resignation followed controversy over extortion accusations after she asked another student for $30 in exchange for the student’s lost ID. The ID was returned, and money was never exchanged. Hinkle-Moore said her decision to step down had nothing to do with the controversy.

Moore said he and USG President-elect Andrew Pierce hope to work with the university to support students transitioning into college — specifically commuter and international students — so they can focus more on their academics and less on adapting to college and American culture. He added that he hopes to continue to work on campus safety initiatives.

Moore said he wants to restructure the operations team that handles membership recruitment and community affairs. He said he also hopes to add a change management team — a group dedicated to transforming an organization’s goals — to ensure student voices are being heard.

“I feel like there’s some miscommunication between USG and the student body that I definitely would like to address, and that’s what I would like them to learn, is that they have a lot of power,” Moore said. “I definitely want to make sure that their voices and the voices of our students are amplified within the space and administration.”

Pierce, a third-year in public policy and analysis, said in an email that applications were released March 21 and promoted on USG’s Instagram. Interviews began March 25.

Pierce said during the emergency session, he and USG President Jacob Chang and Vice President Anna Valerius — reviewed the applications.

“I questioned candidates on not only their motivations on wanting to be vice president, but also their vision for the vice presidency and how they would most want to advocate for students,” Pierce said. “Of those candidates, Derek Moore stood out the most for a variety of reasons.”

USG’s new president and vice president will be inaugurated April 12.