The Lincoln Theatre to present gala in support of local arts 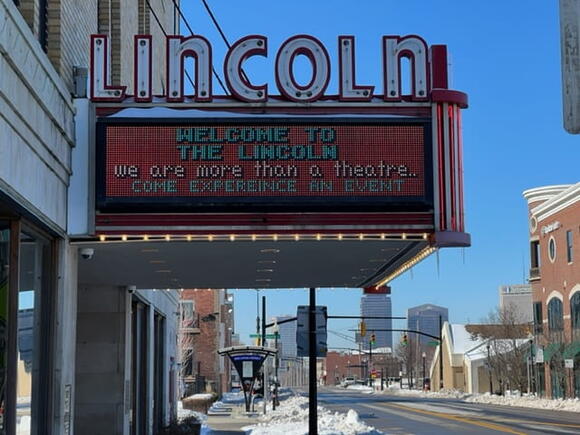 The Lincoln Theatre will host its annual Lincoln Gala Thursday in order to raise funds for the theater and promote the arts in Columbus. Credit: Michael Napolitano | Lantern reporter

The Lincoln Theatre will hold its annual Lincoln Gala celebration Thursday, bringing musicians together to fund the theater’s goal of promoting the arts in Columbus.

The event is set to include performances by Grammy-nominated R&B singer Maysa Leak, as well as the Bobby Floyd Trio and the Ladies of the Lincoln, according to the Lincoln Theatre’s website . Suzan Bradford, executive director of the Lincoln Theatre, said the gala is held annually to raise funds for the theater and highlight various programming.

“We like to put a little bit of a twist on it and say how we acknowledge and illuminate all the great programs we’re doing at the Lincoln Theatre, how strong the community outreach is in our partnerships, and also just thanking our supporters, founders and corporations that support the mission of the Lincoln Theatre,” Bradford said.

Leak performed virtually with the Lincoln Theatre during the pandemic, but she said she is excited to perform at the theater in person for the first time. She said she values the theater’s history and the work they are doing to help artists grow.

“It’s an important theater in Columbus, and historically speaking, we need history in all aspects of life,” Leak said. “I do know that the whole idea of the Lincoln Theatre is a great thing for Columbus, and I’m really excited to come.”

The gala has taken place annually for the last 12 years, following the theater’s revival in 2009, Bradford said. Prior to 2009, the Lincoln Theatre was closed for more than 30 years and slated for demolition before being added to the National Register of Historic Places and revived as the city’s sole urban performing arts and education center, according to the theater’s website .

Bradford said one of the missions of the Lincoln Theatre is to promote, grow and present local talent and artists such as Starlit Ways, Mary McClendon and DJ Jae Esquire by incorporating them into the theater’s signature programs. She said these programs are meant to contribute to the center’s goals of advocating for diversity in and accessibility to the arts and include production workshops , conversations about the arts and spotlights on native Columbus artists .

“Through their completion of our programs, we’re able to continue to support, coach, guide and mentor them into the business of their artistry,” Bradford said. “We think it is befitting that as we invest in them, we also create the opportunities for them to have application, and so the gala is one of those events that we’re able to do that.”

Bradford said viewers who wish to support the Lincoln Theatre are able to do so at any point during the year, not just during the annual gala.

“If you want to support the gala, you can do that, but you can also continue to make donations annually or when your heart is full to support local artists and the Lincoln’s mission,” she said.

As the executive director of the Lincoln Theatre, Bradford said she had control over the programming for the gala and is excited to be able to present this concert on behalf of the theater.

“I have done many different kinds of genres while I have been active over the past 12 years, but not a concert like this,” Bradford said. “I am really excited to see our outcomes and see how we have raised the funds to support the Lincoln and its programming.”

Leak said she does her best to tailor each show to its given city and connect with every audience, which she hopes to do throughout her performance at the Lincoln Theatre.

“Connecting with the audience, I think that’s my favorite part of a show,” Leak said. “It’s not one-on-one, but it feels one-on-one sometimes, like just having a strong connection with people and being able to look in people’s eyes and help people have fun and enjoy themselves.”