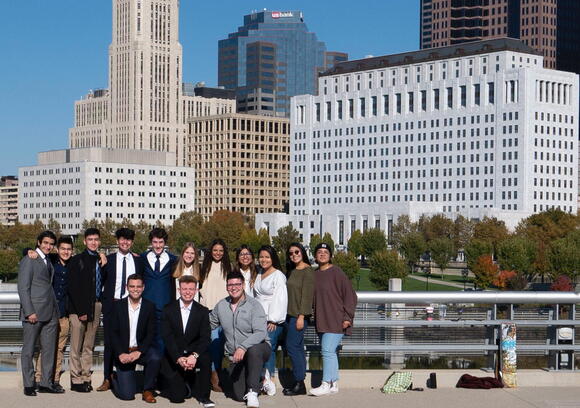 Damian Rivera, CEO of the Association of Latino Professionals For America , will offer advice about business for students of underrepresented groups Tuesday.

Rivera will speak at Independence Hall from 8-9:30 p.m. He has served as ALPFA’s CEO since 2018, after working as a managing director at IT company Accenture for 21 years, according to the ALPFA website .

Rivera was also named one of the 101 most influential Latino leaders by Latino Leaders Magazine in 2018.

ALPFA at Ohio State, an undergraduate student organization housed in the Fisher College of Business, aims to prepare its members for leadership roles involved in various sectors of the global economy. Arón Olegnowicz, a second-year in psychology and political science and vice president of member relations and development for ALPFA at Ohio State, said Rivera will likely have a positive impact on students.

“Having Damian Rivera come in is very exciting in the sense that I’m going to see somebody very culturally related to me,” Olegnowicz said. “To see him come in and speak to inspire other people who might have been in my shoes in the past will hopefully have a very lasting impact on the generations that come to Ohio State.”

Rivera will discuss topics such as the daily life of a CEO, according to the ALPFA at Ohio State website . Students must sign in and register for the event.

Rivera, who received his master’s in business from Columbia University, specializes in social entrepreneurship — a business approach that addresses social, cultural or environmental issues — according to the ALPFA website.

While working for Accenture, Rivera served as the office diversity advocate for New York City’s subway system, focusing on improving employee engagement across the city’s transit system, according to the ALPFA website.

Nicole Natividad Mendez, a third-year in marketing and president of ALPFA at Ohio State, said the chapter puts on events for students during the course of the semester for preparation and growth in the business world. She said the organization hosts professional workshops and general body meetings, as well as interview and resume workshops.

Mendez said the group also works with other companies so students, especially those from underrepresented areas, can begin to build professional connections while in college.

“We also bring in a lot of companies for our members to network with,” Mendez said. “They bring in opportunities for our community, which is so underrepresented, and show us that they’re there to support us.”

Olegnowicz said ALPFA wants the meeting to be accessible, especially to people of marginalized backgrounds, so they can see the support system that organizations like ALPFA and people like Rivera can offer.

“Being able to grow our presence was one of my main goals as president, and I think that bringing Damian in will really show people what opportunities ALPFA can bring them,” Olegnowicz said.