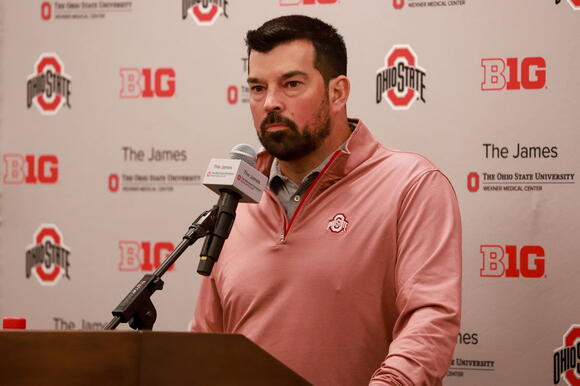 Before Day’s speech, athletic director Gene Smith empathized that no one is alone in addressing obstacles with mental health.

“The most important thing to know is you’re not alone,” Smith said. “There is always someone to help you with what you’re dealing with.”

Day focused his keynote speech on the importance of breaking the stigma of mental health and sharing how mental health has affected him.

“There’s a stigma attached to mental health,” Day said. “We must break it down and be able to say, ‘That’s OK.’ ”

Day is familiar with mental health, as he’s dealt with his own challenges in the past. When he was 9 years old, his father, Ray Day, died by suicide.

Ryan Day said for the next 20 years, he carried a chip on his shoulder.

“I was angry. I thought he was a coward who gave up on our family,” Day said. “It wasn’t till I grew older that I realized it was the impact of mental health.”

Day, a native of Manchester, New Hampshire, said he wanted to make a change when he arrived at Ohio State.

Day and his wife, Christina Day, joined the On Our Sleeves movement for children’s mental wellness in the form of the Christina and Ryan Day Fund for Pediatric and Adolescent Mental Wellness at Nationwide Children’s Hospital , which helps “raise awareness, increase educational opportunities, inspire advocacy, and be a role model for donating to a cause that has historically been ignored,” according to its website.

Day said you must find ways to stay mentally fit, and football is the farthest thing from his mind when he needs to relax.

“I go to the Ty Tucker Tennis Center all the time and hit the ball as hard as I can,” Day said. “It’s great to release all the stress into the ball, allowing you to scream. I can remove all my stress while also staying active.”

Along with tennis, Day said he enjoys watching Netflix to reduce stress.

“I turn on Netflix and watch ‘Peaky Blinders,’ a show farthest away from football,” Day said. “It keeps my mind away from anything stressful during the time.”

Day also spoke about former offensive lineman Harry Miller, who announced March 10 he was medically retiring from football due to struggles with his mental health.

Miller earned OSU Scholar-Athlete recognition twice for his work in the classroom and helped the Buckeyes win the Big Ten Championship and the Sugar Bowl in 2020. In his social media statement about retiring, Miller said anyone, no matter their position, could suffer mental health struggles.

“A person like me, who supposedly has the entire world in front of them, can be fully prepared to give up the world entire,” Miller said. “This is not an issue reserved for the far and away. It is in our homes. It is in our conversations. It is in the people we love.”

Day praised Miller for his courage and bravery to shed light on his own challenges. He encouraged students at Ohio State and around the country to come forward in the best interest of their mental health.

“If an offensive lineman at one of the biggest universities can do it, any student in any dorm can speak up and talk about their mental health,” Day said. “We’re very proud of Harry. We hope that his courageous act encourages more students to speak up when struggling in tough times.”

Day has a saying of “win the moment” in the football locker rooms. He said he uses this to encourage his players to focus on what’s happening right now instead of dwelling on the past.

While this is one of his favorite sayings on the sidelines, Day said it must be used in all walks of life so no one loses sight of what the world has to offer.

He also noted how his student-athletes were more than names on a football team, saying that their happiness shouldn’t be their success in the sport.

“Happiness comes from how happy you are as a person. There’s more to life than school and sports. You need that balance in troubling times,” Day said. “Just like on the sidelines, when you have a mistake, it’s how quickly you can overcome failure and keep moving forward.”

Attending the University of New Hampshire from 1998 to 2001, Day said if he could give his younger self advice, it would be to take a breath and slow down. Now older and embracing the topic of mental health, Day said everyone must prioritize their self-care and mental health.

“We’re responsible for our own happiness. We have to take accountability,” Day said. “Love yourself and know that people will support your struggles.”