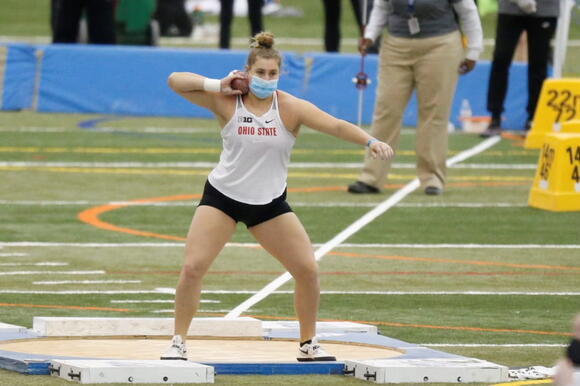 Adelaide Aquilla achieved her ultimate goal before even graduating college.

She represented the U.S. at the 2020 Tokyo Olympics. Now, she’s back in Columbus hoping to end her Ohio State career as a national champion.

For most college athletes, it may be easy to become complacent after competing at the Olympics. However, Aquilla is different from most, according to Ohio State throws coach Travis Coleman.

“She has such high expectations and goals. She expects so much out of herself that I almost find myself talking her back the other way to take that step back and realize how far she’s come and where she’s moving towards,” Coleman said. “She is one of the most internally motivated people I’ve met.”

For Aquilla, that drive begins with her approach to practice every day.

Whether it is the first practice of the year or the last one before nationals, she said her trick is to avoid being complacent.

“I think it really starts how you approach practice every day. If you’re coming into practice saying, ‘It doesn’t really matter, I’ve already competed at the highest level,’ then that’s where you get that complacent feeling,” Aquilla said. ”Then in the meets, it could affect how you perform if you’re not taking that meet seriously just because you’ve already been to that level.”

Aquilla said lessons she learned at the Olympics also drive her to continue to compete at her highest level.

“I think one of the biggest things I learned is that a lot of the stuff I’ve achieved in college, as sad as it is, doesn’t really mean anything in the professional world,” Aquilla said. ”They are all very great accolades, but once you get to that very high level, everyone is just competing for that moment and they don’t focus on whatever you’ve achieved in the past.”

While Aquilla and Coleman aren’t worried about her falling into the trap of complacency, they are focused on another “C” word: consistency.

Ever since Coleman joined the Ohio State staff last September, he has been working with Aquilla on her consistency.

“The big thing I started trying to bring to her is to compete at that level that she’s looking for. Consistency is going to be her biggest thing. Consistency breeds excellence,” Coleman said. “I think that’s the biggest thing I’ve been able to instill in her, then everything else is just blossoming from there as we go.”

That focus on consistency has led to a slight change in the way Aquilla practices, but she said it’s been for the better.

Coleman and Aquilla said they have been saving throws in practice with the hope that it breeds the consistency she wants in meets.

“In previous years, we’ve not really tried to save throws at practice, so this year we’ve been really focused on saving throws and setting a standard for myself,” Aquilla said. “After last year, I told coach Coleman that I want to consistently be an 18-meter shot putter, so we’ve focused a lot of energy on consistently producing those throws because the 18-meter throws are throws that will get you into pretty much any final at the NCAA level.”

As a two-time national champion, Aquilla is no stranger to finals at the NCAA level. She said she hopes to make it there again this spring while also trying to break the NCAA and world records.

If there’s anyone that believes she can do it, it’s Coleman, who said he has quickly learned to not doubt Aquilla. He said he knows she won’t stop until she’s proved the doubters wrong.

“If you tell Adelaide that she can’t do something you can almost guarantee it’s going to happen,” Coleman said. “She thrives on proving herself wrong or proving the doubters wrong. When she does it, she’s unstoppable.”