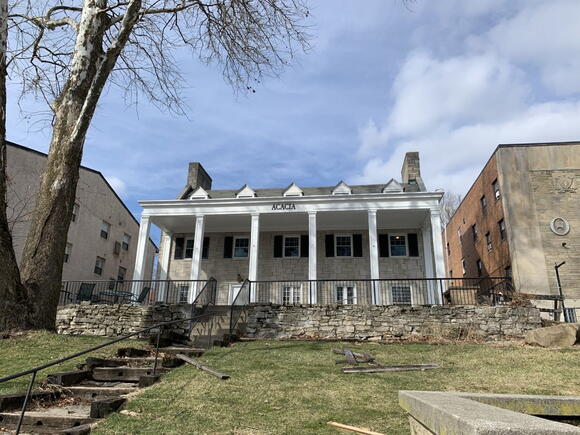 The Waw chapter of the Acacia fraternity, founded in 1906 at Ohio State, had its student organization status revoked until at least 2026 for charges of noncompliance. Credit: Courtesy of Kyle Meddles

The Waw chapter of the Acacia fraternity, founded in 1906 at Ohio State, had its student organization status revoked until at least 2026 for charges of noncompliance with university or civil authority and dishonest conduct, according to the Sorority and Fraternity Life’s website . Specific details were unknown the day of the revocation, but documents from the case from the Office of Student Life provide individual examples of Acacia’s violations.

“My roommate received a text saying that he has to spend 3 days in the Acacia house basement,” an anonymous person said in a Nov. 30, 2021, report. “He is very bothered/anxious/panicking.”

A Nov. 1, 2021, incident report stated that victims were forced to perform “unpaid slave labor,” including arriving places early in the morning to help with tasks. The report also described how victims were bullied and yelled at by other members to get into a plank position or do push ups.

In a letter to Acacia members explaining the outcome of the organization’s case, Emma Anderson, a conduct case manager at Student Life and Student Conduct, said the chapter took responsibility and requested an administrative decision for alleged violations of hazing, noncompliance with university or civil authority and dishonest conduct.

Anderson gave examples of Acacia’s violations of dishonest conduct and noncompliance in the letter, saying some of the main issues dealt with inaccuracies in the fraternity’s roster.

“Rosters provided to Sorority and Fraternity Life and Student Conduct did not accurately represent membership of the Waw chapter,” Anderson said in the letter. “Specifically: students who were new members in the spring 2021 semester were not reported, and were falsely listed as new members in autumn 2021.”

These false counts of membership in the fraternity were considered “dishonest conduct,” according to the letter.

During the spring semester of 2021, the Waw chapter was under an interim suspension and was not permitted to engage in any activities, according to the letter. The recruitment and interactions between the new member class during the semester failed to comply with the rules of the interim suspension.

Sanctions from the chapter’s 2020-21 Student Conduct cases provided support and safety to the success of the organization, Anderson said in the letter. She said the Waw chapter avoided the supporting sanctions and continued operating covertly, resulting in harm and systemic culture issues throughout the organization.

Acacia’s national office can begin to reestablish a chapter at the university four years after the revocation of the Waw chapter and after committing to eliminate “rogue” off-campus group activity by the chapter, Anderson said in the letter.

If people are aware of Acacia or any chapter that has had their active status revoked and continues to operate, they are encouraged to fill out a grievance form on the Sorority and Fraternity Life website , Ben Eisenberg, president of the Interfraternity Council, said in an email.

Eisenberg said the council wants students and chapters to be honest about Code of Student Conduct violations to ensure a positive experience when joining a fraternity.

“We encourage everyone that is being hazed or participating in activities that violate the Code of Student Conduct or IFC bylaws to share that information,” Eisenberg said. “For students or chapters that are going through a Student Conduct investigation, we believe that honesty is always the best policy.”