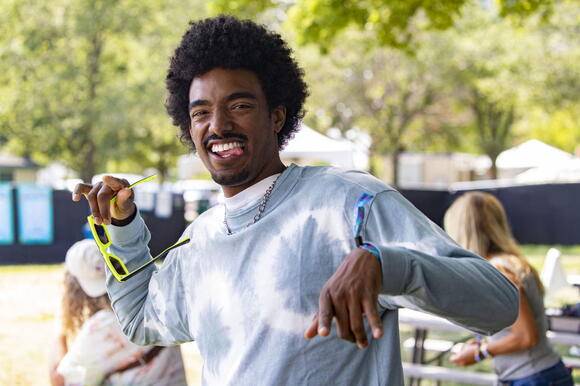 Tai Verdes poses for a portrait on the third day of Lollapalooza on July 31, 2021, at Grant Park in Chicago. Credit: Courtesy of Vashon Jordan Jr via TNS

Verdes, known for songs largely popularized on TikTok such as “A-O-K” and “Stuck in the Middle,” will now take the stage April 11 at 7 p.m. in the Newport Music Hall, according to a Monday Instagram post from the Ohio Union Activities Board . The concert was originally scheduled for March 26, and all tickets claimed prior to the original concert date will still be accepted.

Cam Shahrooz, a third-year in mechanical engineering and director of concerts for OUAB, said in a text that the concert was postponed March 24, two days before the originally scheduled date. Shahrooz would not further comment on why the concert was rescheduled.

Verdes will be preceded by student opening acts, which Shahrooz said were determined through the Buck’s Got Talent show Feb. 28. Students in attendance voted for their favorite musicians out of the six musical groups from Ohio State vying for the spring concert opening slot.

A Band Called Dreamland , which won second place at the talent show, will open the concert, while first-place winner Jack Harris will take the stage just before Verdes.

Doors will open at 6:30 p.m. and admission is free, but a ticket and a valid BuckID will be required for entry. Tickets are available on OUAB’s website , and concertgoers will be admitted into the venue on a first-come, first-served basis.