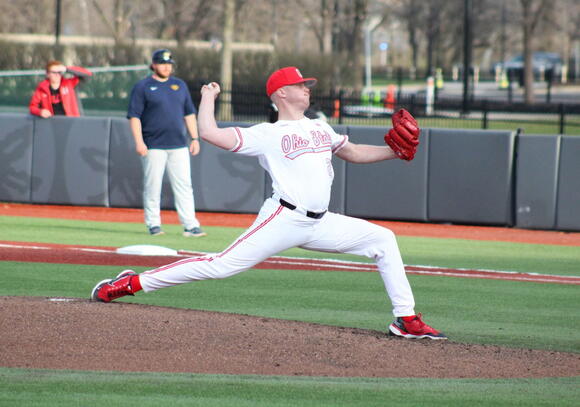 Ohio State looked to be on its way to another win over an in-state rival, but inconsistent pitching and a nightmare sixth inning saw the Buckeyes fall to Toledo 7-6 Wednesday.

The Buckeyes (8-12, 0-1 Big Ten) and Rockets (12-11, 6-5 Mid-American Conference) used a combined 13 pitchers in a bullpen game that was dictated by the long ball. Each team had multiple players hit home runs, but Toledo capitalized in the sixth inning, hitting three home runs and taking a lead it would never look back from.

“We gave up runs and we didn’t execute pitches,” head coach Greg Beals said. “But there’s two sides to it. We didn’t score for the last 5 2/3 innings. We have just got to be tougher than that.”

The Buckeyes struck in the first inning with back-to-back solo home runs by senior infielder Zach Dezenzo and sophomore outfielder Kade Kern. Ohio State extended its lead on a sacrifice fly by senior infielder Marcus Ernst in the second inning to make it a 3-0 game.

The Rockets’ offense came alive after facing adversity early. In the third inning, the Toledo offense was all over senior right-hander Aaron Funk. After a single by junior designated hitter Marcus Strother, junior infielder Darryn Davis cut the Buckeyes’ lead to one on a two-run home run.

In the fourth inning, the Rockets tied the game at three on a solo home run by senior outfielder John Servello. Funk ended his day with the most work by an Ohio State pitcher at two innings, giving up three earned runs.

However, in the bottom of the same inning, after freshman outfielder Trey Lipsey walked, sophomore designated hitter Blayne Robinson hit an RBI double that put Ohio State back in front. Ernst and freshman infielder Tyler Pettorini tagged junior right-hander Kyle Music for an RBI double and sacrifice fly, respectively, to extend the Ohio State lead to 6-3 after four innings.

Freshman right-hander Brennan McCune began to quiet the Buckeyes’ offense through the middle innings. McCune pitched two shutout innings and was credited with the win.

Beals said once McCune entered the game, the Buckeyes’ offense became stagnant. The Ohio State offense could only muster four hits in the last 5 2/3 innings of the game.

The sixth inning became the defining inning of the game. After Servello walked to get on base for the third time, sophomore outfielder Scott Mackiewicz hit a two-run home run off of junior right-handed pitcher Tyler Kean to cut the Ohio State lead to one.

“No matter the situation, we’re always trying to throw up zeroes regardless,” redshirt freshman right-hander Tim Baird said. “But even when we get stuck, we need to show we have a lot of fight in us and you’re going to have to bring your best stuff.”

The damage was not yet done, as Kean got tagged by freshman infielder Garret Pike on a solo home run to tie the game at six. After freshman right-hander Jake Johnson came in relief for Kean, he gave up a solo home run to freshman outfielder Caden Konczak to give Toledo a 7-6 lead.

“It’s honestly just having confidence,” Hammerberg said. “It’s about doing the little things right every day during practice and not slacking off because practice translates to game performance.”

The Buckeyes had one last chance in the ninth inning when Pettorini got hit by a pitch and Dezenzo fell short on a potential walk-off home run, flying out to center field. However, Ohio State couldn’t capitalize in the final innings and lost a thrilling 7-6 game.

Beals said he expects the team to battle on the mound and at the plate in the next series, which will be the Buckeyes’ first full conference series after inclement weather postponed two games at Purdue Saturday and Sunday.

“We got to dig down as a ballclub,” Beals said. “We have got to keep going, and we have some added pressure not playing well. We need to dig deep and be tougher.”

Ohio State plays its next game at Bill Davis Stadium against Nebraska Friday to begin a three-game series.