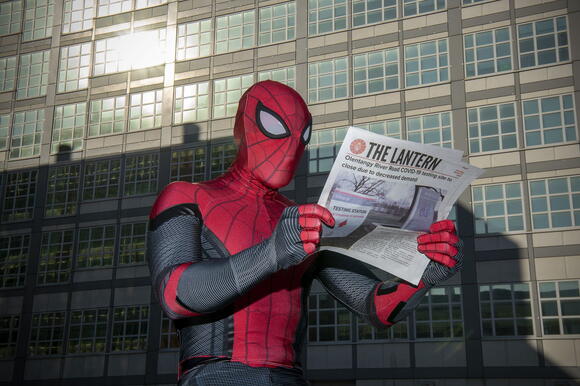 Phil Re works as a registered nurse at the Wexner Medical Center at Ohio State, and as campus’s own Spider-Man.Credit: Courtesy of Wendy Pramik

Phil Re has a passion for helping others and being a source of joy, which he channels into his work as a registered nurse at the Wexner Medical Center at Ohio State and as campus’s own Spider-Man.

Re, an Ohio State alumnus, said after watching the movie “Spider-Man,” starring Tobey Maguire, he became fascinated with the character. In particular, he said he now lives by a line from the movie, “With great power comes great responsibility,” serving as his inspiration to wear the suit.

Although he doesn’t wear the suit while making his rounds at the medical center, Re said he wears it around campus to perform random acts of kindness and meet new people. He said he also wears it to football games on occasion.

Nichole Dowell, a registered nurse at the medical center, said she is one of Re’s preceptors — a licensed clinician who supervises nursing students during their clinical rotations. She said Re loves what he does and is passionate and caring toward his patients.

“He’s just obsessed with Marvel stuff,” Dowell said. “I think also his personality shines through with all that, like I think he just truly, I mean, nursing is definitely the right profession for him.”

Re has also been featured on television stations such as Fox 28 News in Columbus, and, most recently, on “Good Morning America” Monday.

Ben Bohman, a registered nurse at the medical center, said he has known Re since his first year at the university and he enjoys seeing his impact. He said he’s especially impressed by how Re remains humble despite all the attention he has received.

“I think it’s really awesome that Phil’s being recognized for this because there’s something that he didn’t do to get attention,” Bohman said.

Bohman said since there aren’t many men in nursing, he and a group of other male students would sit together during lectures and call themselves “murses,” short for male nurses. Initially getting to know Re in that lecture group, Bohman said it was Re’s detail and care-oriented attitude that has led him to become Ohio State’s superhero.

Re said he plans to continue dressing as the superhero, hoping to contribute to the wellness of patients through social media posts for the medical center as well as his own Instagram page .

“The world’s a crazy place right now, and you got to take it how it is and roll with the punches,” Re said.