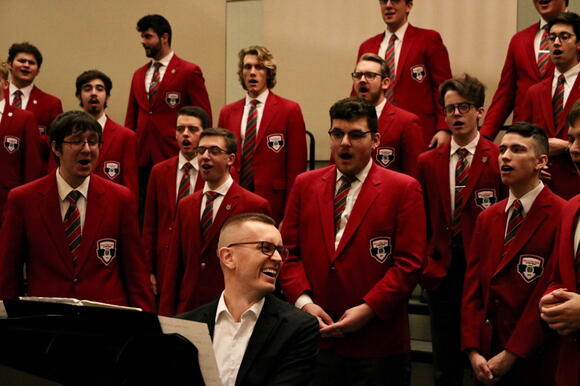 The Men’s Glee Club performs one of its last pre-pandemic concerts at the OMEA Professional Development Conference Jan. 31, 2020, at the Cincinnati Music Hall. Credit: Courtesy of Robert Ward and the Men’s Glee Club.

Two years after the start of the pandemic, the Men’s Glee Club will once again perform maskless.

The Ohio State Men’s Glee Club will resume mask-free performances after a hiatus that forced the group online, Robert Ward, director of Choral Studies at Ohio State and the ensemble’s leader, said. The group will put on two performances Sunday — one at 4 p.m. and the other at 7 p.m. — in the 1858 Meeting House in Mechanicsburg, Ohio, according to the event page.

“After 38 years of college-level teaching, I had no idea what to expect after a year and a half of silence,” Ward said. “I think they came out of the gate ready to sing enthusiastically, pleased to be back — their energy and level of musicianship had not sunk one bit. And we just picked up right where we left off.”

The glee club is taking part in Ohio State’s land-grant tradition of community outreach and engagement by performing in Mechanicsburg, a village 30 minutes west of Columbus, made up of a little over 1,000 residents in rural Champaign County, Ward said. Two members of the glee club are from the town, and Ward said local music educators reached out to him about putting on the performance.

“I’m going to make a public statement thanking the music teachers in the Mechanicsburg area and school system for teaching these two students who are now part of this ensemble, one of the country’s top 10 collegiate men’s choirs,” Ward said. “We’re going to make a very public, very intentional statement that the arts are back. And the arts have always, do have and will forever have a presence on the campus of Ohio State University.”

Part of being a performing arts group at a land-grant school means performing acts of outreach and engagement in communities that are not always near Ohio State, Ward said.

“The OSU Men’s Glee Club is part of that outreach and engagement,” he said. “I think the future of the performing arts, to a large extent, will depend on the arts going to where the people are, not expecting that the people will always come to where we are.”

Not only does the glee club want this performance to highlight communities beyond Ohio State, but within the group’s own ranks as well, Jarrod Hay, a fourth-year in neuroscience and president of the group, said. He said the group came back stronger than ever now that members are able to perform at full capacity, without masks.

“This group cannot exist without the flourishing community that exists between the members,” Hay said. “This is something that has to come before simply making great music, and I think that the drive for events and the drive for connection that was lost last year has really brought everyone closer together.”

The concert program will include four works performed by the 67-person glee club, as well as two numbers by Men’s Glee Club members who comprise the Statesmen — a separate, auditioned, “lighter fare a cappella group,” Ward said. Hay said the Statesman will add an interesting variety to the concert, leaning toward the pop music side of the choral spectrum.

Ward said he purposely chose accessible and upbeat music for the occasion, including Brant Adams’ “Musica!” and Joseph Martin’s “The Awakening.” The Statesmen will perform William S. Pitts’ “That Little Church in the Wildwood” and will close with a traditional Buckeye medley, he said.

“The pieces for this concert are intentionally up-tempo, positive, enthusiastic texts, all intended to be a celebration of the fact that we were silent for a year and a half,” Ward said. “So they were chosen for that reason, lots of energy, lots of hype. We’re glad to be back.”

The 1858 Meeting House is located at 43 E. Sandusky St. According to the event listing on Eventbrite , there are limited tickets available for each concert priced at $20 each.

“This is a really exciting experience for us, and I sincerely hope that the people who choose to come to these performances get as much out of it as we will,” Hay said.