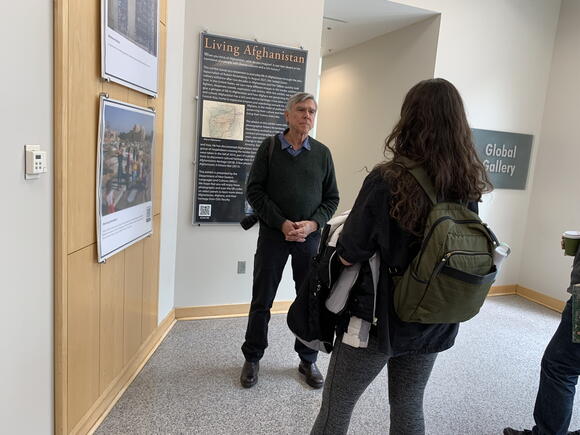 Robert Nickelsberg did a gallery walk Tuesday to talk about his work in the exhibition “Living Afghanistan,” on display in Hagerty Hall until April 29. Credit: Amani Bayo | Lantern Reporter

The photo exhibition “ Living Afghanistan ,” displayed by the Department of Near Eastern Languages and Cultures, aims to bring a fresh narrative surrounding Afghan culture to campus.

The exhibition, which will be on display through April 29 in the Global Gallery in Hagerty Hall, features everyday moments captured by photojournalist Robert Nickelsberg during the 25 years he spent in Afghanistan . Nickelsberg attended the exhibition to do a gallery walk Tuesday, during which he shared the stories behind the photos.

“What this helps to show is what different Afghan narratives include,” Noah Blacker, academic program coordinator for the department, said. “It’s so important to get beyond the headlines and think of Afghanistan as something that’s not just a battleground.”

A former photographer for Time magazine, Nickelsberg combined the work he had done in Afghanistan since 1988 into his 2013 novel “Afghanistan: A Distant War,” according to Nickelsberg’s website .

Nickelsberg said the “Living Afghanistan” exhibition consists of 48 panels of his photos from Afghanistan. He said the purpose of the exhibition was to capture Afghan people in their daily lives and engage with their culture without the presence of politics.

“As a journalist, we rarely have time to cover topics like this, so this was a treat,” Nickelsberg said. “No guns, no flag jackets, no military boots, nothing. Pure culture. That’s the beauty of this project.”

Nickelsberg said he aimed to preserve culture through photography by capturing key structures that are integral to Afghan heritage — such as the white marble mosque in Bagh-e Babur, or Gardens of Babur.

“Before the Taliban came in August of 2021, people were freely accessing these places,” Nickelsberg said. “Now, with the Taliban in power, there’s uncertainty this history will be preserved. This maintains it so people can appreciate their own culture.”

Nickelsberg said his interest in photographing the people and cultures of countries facing regional turmoil is rooted in his upbringing.

“I was raised during the Vietnam War period, so I’ve been around conflict and trying to understand it all my life,” Nickelsberg said.

Several students attended the gallery walk with Nickelsberg, and Swati Mishra, a first-year in public health, said she was surprised to find a connection between Afghan culture and Indian culture. Mishra said she was especially drawn to photos of a garden named after a Mughal emperor, Shah Jahan, which also carries cultural significance in India.

“Understanding that Shah Jahan was from Afghanistan, seeing that cultural coincidence, it was really nice to see,” Mishra said.

Multiple students asked Nickelsberg about his inspiration and the manner in which he produced the collection displayed in “Living Afghanistan.”

Despite admiring the exhibit, Mona Dada, a fourth-year in human development and family science and a member of Community Refugee & Immigration Services, told Nickelsberg she had reservations about how and whether Nickelsberg went about gaining consent from the individuals photographed.

Ila Nagar, associate professor in the Department of Near Eastern Languages and Cultures and program coordinator of the exhibition, said she was pleased with how many students came to visit the exhibition and attend the gallery walk, as it is one of the first in-person events the department has put on since the pandemic.

“We are so happy,” Nagar said. “Seeing students actually talk to us at some point — we really missed that type of interaction during the pandemic.”