Columbus bakery donates all March proceeds to help those in Ukraine 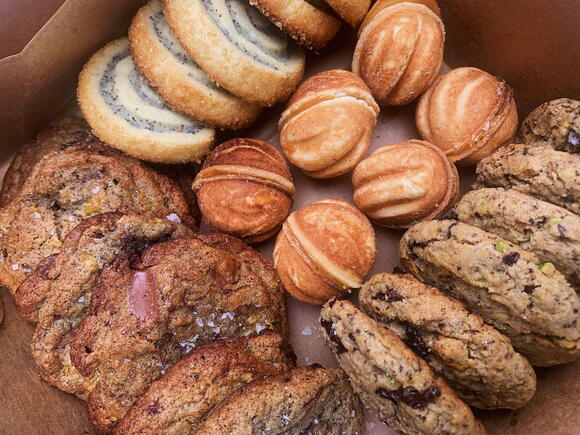 Masha Downing, owner of home bakery Pechka Bakery, has donated all proceeds from cookie sales during the month of March to help those in Ukraine. Credit: Courtesy of Masha Downing

A Columbus home bakery will donate all proceeds from cookie sales during the month of March to organizations aiding those in Ukraine.

Pechka Bakery, owned by Masha Downing, will donate money made from cookie sales during March to World Central Kitchen and Razom for Ukraine . The bakery is described on its website as a “cottage bakery located in Columbus, Ohio, featuring Eastern European flavors.”

Downing, a Russian native whose family members have fled both countries since Russia invaded Ukraine, said this was a way for her to use her business to help those in need.

“I have family from both Russia and Ukraine, so every day since the invasion, I have been receiving horrifying news from my relatives,” Downing said. “Feeling absolutely helpless and a guilt that I’m not with my people, this is the only outlet that I could find.”

Downing said March was a busy month for her, and she ended up working many 16-hour days and baking 966 cookies, as of Wednesday. She said the community support has been encouraging, as she has raised $2,260, surpassing her goal of $2,000.

“It has been busy, but it has been really great to see the community really support the cause that is very personal to myself,” Downing said.

Despite the month coming to a close, Downing said Ohio State students can continue to help by supporting the Ukrainian community on campus. She said the Ukrainian Society of The Ohio State University has been proactive in aiding efforts in Ukraine.

“They hosted a bake sale, they’ve been on campus trying to share information,” Downing said. “It is important for Ukrainian and Russian speakers at Ohio State to have that smaller community right now. Hopefully professors are talking about it and discussing what is going on around the world.”

David Novikov, a third-year in computer science and engineering and a member of the Ukrainian Society at Ohio State, said it is not surprising that Downing — who is a family friend of his — is donating proceeds to help Ukraine.

“It is the right thing to do,” Novikov said. “It is very in line with her character because she is a very nice and warm and giving person.”

Novikov said the Ukrainian Society has put on several events and activities to raise funds and awareness for the war in Ukraine. He said the club has hosted two fundraisers since Feb. 25 — raising $9,100 total — and a donation drive for medical supplies.

According to Pechka Bakery’s website , orders should be placed at least five days prior to the desired pickup date. Downing said she is available for pickups before 8 a.m. and after 3 p.m. Monday through Sunday.