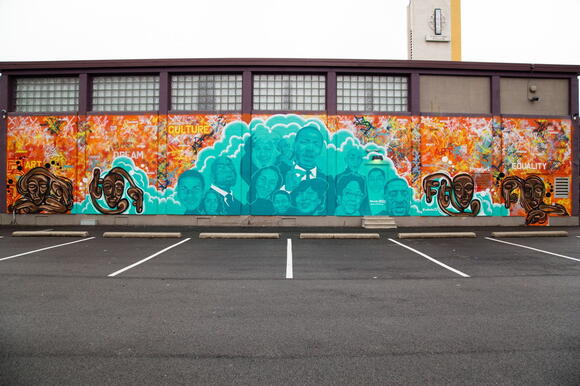 Forty-six days of artistic protest culminated in “The HeART of Protest”mural, which included work from over thirty different art and cultural organizations, such as the Columbus Association for the Performing Arts and the Center of Science and Industry. Credit: Courtesy of The King Arts Complex

The King Arts Complex celebrated its 35-year anniversary Sunday and is hosting a new exhibition highlighting the center’s power to shape artists.

The multidisciplinary arts center partners with the Columbus Museum of Art and aims to cultivate a sense of community and art — specifically Black art — within Columbus, Jevon Collins, performing arts director for the center, said.

“What we’ve been able to accomplish over 35 years makes it so special, and we applaud everyone that’s doing some great programming, not only in the arts and community here in Columbus,” Collins said. “So we look forward to just being a part of the great things going on in Columbus now.”

The King Arts Complex employed the power of art in protest during the height of the Black Lives Matter movement in 2020 following the murders of George Floyd and Breonna Taylor, Collins said. “ The HeART of Protest ” consisted of 46 days of artistic protest, culminating in a mural that included work from over 30 different art and cultural organizations, such as the Columbus Association for the Performing Arts and the Center of Science and Industry, according to its website .

“We wanted to respond to what was going on through the arts and also galvanize all our arts partners who may have felt they didn’t know what to say, just kind of connecting everyone so we can speak together instead of speaking out at each other,” Collins said.

Despite the waning pandemic, the center continues to practice caution when gathering larger crowds for events, Collins said. However, exhibitions continue, including a recent MLK Day Open House Celebration at the Ohio History Center and Natalie Orr’s “Aurora” exhibition in January. Currently, Wendy Kendrick’s “Daughter of the Thread” exhibition will be on display until May 22.

“Daughter of the Thread” is being presented in partnership with the Columbus Museum of Art. Kendrick said the exhibition, which is a culmination of her work with collage, sewing and quilting, demonstrates the growth she has undergone as an artist because of The King Arts Complex and art museum, she said.

“If I hadn’t had their support, I don’t know if I would have continued and branched out the way that I have,” Kendrick said. “You know, my journey has taken me many places since I first started with The King Arts Complex. They have been very, very integral in my growth as an artist.”

Kendrick, a collage artist, is the 2021 recipient of the museum’s Aminah Robinson Fellowship — an award that honors the local artist whose artwork focused on Black history. After Robinson’s passing in 2015, Kendrick said Robinson left her entire estate to the Columbus Museum of Art, including her home, which was turned into an artist residence.

Recipients of the fellowship are granted access to the residence to work on their art for the year. Kendrick said the fellowship allowed her to explore various mediums of art including quilting, masks and installation art — several of which are displayed in “Daughter of the Thread.”

Kendrick said her grandmother taught her how to sew and influenced her use of applique — a practice of ornamental needlework — in her work. “Daughter of the Thread” takes the tradition she learned from her grandmother and puts a twist on it.

“It was experimentation for me,” Kendrick said. “The exhibit, it’s a lot of things, but it’s also giving honor to the women in my family who pass the tradition down of earning their livings by the needle, by sewing.”

“Daughter of the Thread” is on view at The King Arts Complex’s Elijah Pierce Gallery, located at 835 Mt. Vernon Ave., for free through May 22. Visitors can make appointments to see the exhibition or visit the gallery between the hours of 6-8 p.m. on Thursdays.