College of Arts and Sciences podcast highlights work of faculty 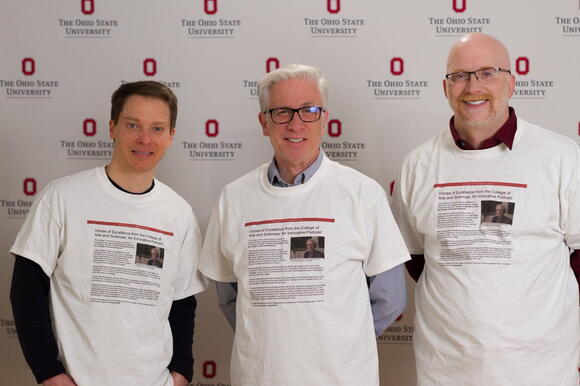 Medieval Parisian shopping , the metaverse and the inner ear are all subjects covered in the “Voices of Excellence from the College of Arts and Sciences” podcast.

Recently surpassing its 150th episode, “Voices of Excellence” faculty and staff work in the College of Arts and Sciences, according to the college’s website . Douglas Dangler, producer and digital media studio manager for the podcast, said he came up with the idea after realizing the college was doing impressive things while receiving little publicity.

The podcast then evolved into an interview show after he reached out to David Staley, an associate professor in the Department of History and host of the podcast.

“When Doug asked me if I’d be interested in hosting this, I was literally jumping up and down inside like a little kid,” Staley said.

Staley said he spent a lot of time in radio stations growing up because his dad worked in the industry. From a young age, he had wanted to be a disc jockey — an interest that evolved into wanting to host an interview program before fading from his mind.

“I went to college and went to graduate school, got married,” Staley said. “You know, you put those sorts of things out of your mind. And then when Doug Dangler says, ‘Would you like to be the host of, you know, of a radio program?’ I jumped at the chance.”

“It’s great to be involved with these podcasts and get to see people doing really great work about academic topics and releasing some really fascinating information,” Dangler said. “If you go through the ‘Voices of Excellence’ stuff, there’s some really great interviews that [Staley’s] done that talk about topics that are relevant for many people and are fascinating.”

Podcasts are especially conducive to learning, serving as a more comprehensive introduction to the research and work done by faculty and staff than written words, Staley said.

“I think listeners would rather listen rather than read,” Staley said. “In a sense, we are presenting the professor’s research through conversation, which is something that I think is not easy to convey in writing. And I think that’s the real strength of what we’re doing.”

Through the podcast, listeners not only benefit from learning about the work guests have been doing, but from their experiences as well, Dangler said.

“They have a lot of other interests and are in their field because they’re fascinated by it, but also because it’s the culmination of many other things that we oftentimes just don’t think about being part of their journey,” Dangler said. “It gives you a much better sense of who they are as a person and, frankly, how impressive a lot of the faculty here are.”