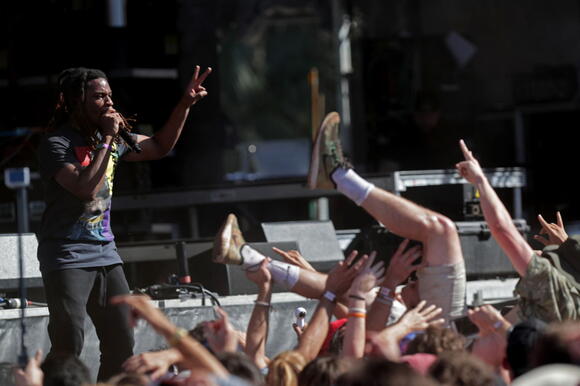 Denzel Curry interacts with the crowd during his performance Sunday, March 4, 2018 at the Okeechobee Music Festival. Credit: Courtesy of John McCall/Sun Sentinel/TNS

Curry has been one of the more consistent rap artists over the past couple of years, releasing thematic albums such as “TA13OO” and “ZUU” that sit well in their own right. However, his new album comes just over two years after “Unlocked,” released in 2020. Curry poured his heart into “Melt My Eyez See Your Future,” easily making it a contender for album of the year.

The album starts off with “Melt Session #1 [Feat. Robert Glasper].” The track is a telling story of Curry’s past traumas, vices and internal struggles. Riding over a groovy, drum-heavy instrumental, Curry’s raw vocals sound flawless on the introductory track.

“Walkin,” the single track off the album, features another impressive lyrical performance from Curry over melodic instrumentals. During the second half of the song, Curry ups his energy, delivering a lively verse to send the track home. “Worst Comes To Worst” has a strong showing, providing impressive lyrics over a gloomy, strong background.

“John Wayne [Feat. Buzzy Lee]” is an unnerving and darkly beautiful song revolving around police brutality and gun violence in the U.S., as well as the need Curry feels to carry a gun to protect himself from the people sworn to protect him.

Following “The Last,” a track that fails to reach the level of the others on this near-perfect album, comes “Mental [Feat. Saul Williams & Bridget Perez].” The vulnerable track is one of the strongest performances in Curry’s discography, and he raps about mental health over minimalist instrumentals filled with pianos and background vocals.

“Troubles [Feat. T-Pain]” is a sudden change of pace, featuring more upbeat, light instrumentals. Despite being sonically cheerful, the track focuses on struggles that no amount of success can fix. T-Pain delivers a great verse and contributes heavily to the background vocals, making it an exceptional performance from the duo.

The following song, “Ain’t No Way [Feat. 6LACK, Rico Nasty, J.I.D, Jasiah & Powers Pleasant]” is another phenomenal two-part track. Rico Nasty starts off the song with an energetic, demanding verse. Following her verse, the track takes more of a mellow approach with a soothing verse from J.I.D and another verse from Curry, which is filled with openness and vulnerability about his suicidal thoughts.

“X-Wing” is a more lighthearted song with an infectious chorus and two equally catchy verses. Following that comes another heavy track in “Angelz [Feat. Karriem Riggins].” Curry hones in on his need for validation and his reluctance to let new people into his life, as he’s had too many negative experiences in his past. It is yet another somber track filled with raw lyrics.

Next comes a synth-heavy track in “The Smell Of Death.” The only issue to be found with this song is its short length, as it sits at just over a minute. The distorted vocals and instrumentals in tandem create an unsettling sound that is somehow also pure.

“Sanjuro [Feat. 454]” is a hard-hitting track that is untamed, but works. Curry’s raspy flow fits into the song perfectly, and he maintains a high level of energy throughout the track. “Zatoichi [Feat. slowthai]” is another eclectic track filled with loud instrumentals and smooth verses from Curry.

As the album concludes, Curry delivers with the outro track “The Ills.” The song is passionate and thoughtful, sending out the album on a high note.

Curry has shown improvement and versatility in each project he has released thus far, and “Melt My Eyez See Your Future” is no exception. Not only did Curry maintain his winning streak with the project, but he knocked it out of the park, creating an album consisting of his most mature, well-thought-out lyrics to date.