Men’s Tennis: No. 3 Buckeyes get back in the win column with 4-0 sweep against Central Florida 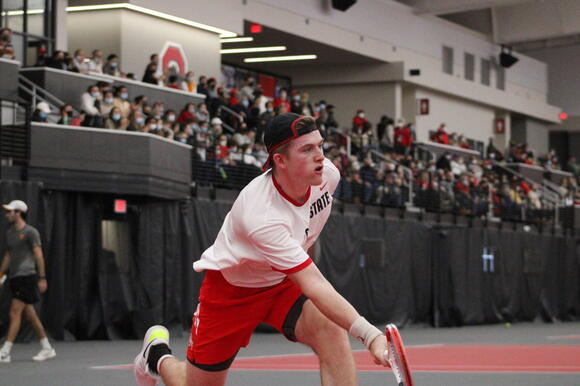 Following a rare loss Sunday, No. 3 Ohio State bounced back into the win column with a 4-0 sweep of Central Florida Friday.

The match against the Knights served as an opportunity to regroup following a string of tough opponents, No. 10 junior Cannon Kingsley said.

“There’s a lot of matches in the season,” Kingsley said. “Some guys are getting a little tired, we had about eight matches in a row against top-10 teams and this was a nice match to get a reset.”

Kingsley led the Buckeyes’ victory with a great performance in both singles and doubles. He and sophomore partner JJ Tracy, fresh off of a jump from unranked to No. 11, set the tone early with a 6-1 showing against freshman JC Roddick and senior Alan Rubio.

The Buckeyes’ duo joined the rare pairing of senior James Trotter and redshirt junior Andrew Lutschaunig in securing the doubles point for Ohio State against redshirt freshman Quinn Snyder and senior Vasyl Kiselyov. Lutschaunig, seeing action for the first time since Jan. 19, hit the point-clinching shot in his return to the court.

Central Florida’s junior Lleyton Cronje and freshman Cooper White scored a major upset for the Knights, defeating No. 1 junior Robert Cash and graduate Matej Vocel 6-3 as the lone victorious court for the Knights.

Despite the upset in doubles, Cash, No. 64 in singles, led the charge for the Buckeyes, winning his first 10 games en route to a 6-0, 6-1 win. This continued a string of successful singles outings for Cash, who has risen over 30 spots in the Intercollegiate Tennis Association rankings this season.

Cash said he was happy with the recognition in the rankings but emphasized that the placement and success of the team are his primary focus.

“It felt great being back at home, playing in front of our home fans,” Cash said. “It was awesome to get on and off the court pretty fast and I’m just happy to get a win.”

The second finisher for the Buckeyes would be No. 10 Kingsley, nabbing a 6-4, 6-1 victory in his first outing as a member of the top 10. Cronje made things tight in the first set, as close as 4-4, but Kingsley followed up by taking seven-straight games, allowing him to pull away.

“[Cronje] was playing well,” Kingsley said. “He was serving well so I had to adjust. I wasn’t really sure who I was playing before the match started, so I had to read his game a little bit but once I got comfortable I think I did alright in the second set.”

The final Buckeye point came via graduate Jake Van Emburgh, wasting no time early in his match against Rubio. Van Emburgh led 5-1 before faltering, letting Rubio get within one game before closing out the set 6-4. He never lost momentum from there, taking the second set and the match 6-4, 6-1.

The match will serve as the penultimate for Ohio State before a two-week long break. Cash said the team is still focused on the present but looks forward to the upcoming opportunities ahead.

“Guys are a little banged up after a long three weeks,” Cash said. “We know we got to get through this week because every match matters and everyone’s good. We’re just trying to bring in every match and take care of business.”

The Buckeyes play again Sunday in South Bend, Indiana, against Notre Dame before taking a hiatus for 13 days. The match will kick off at 2:30 p.m. and will be livestreamed on the Ohio State Buckeyes website .